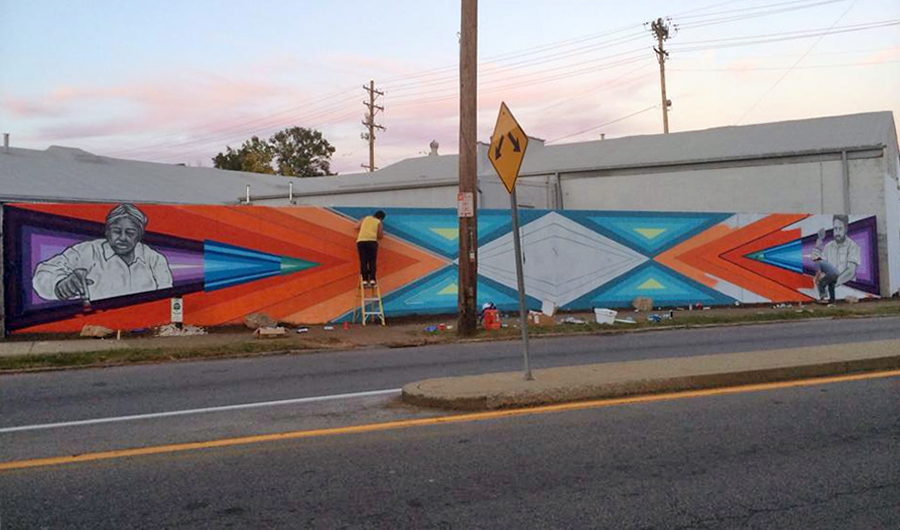 There’s no lack of interesting urban developments in the River City this fall. Whether you’re excited about the new Hill Billy Tea on Baxter Avenue (and you’d better be, that place is delicious!), the announcement of a Louisville “Food Hub” on 30th and Market streets, or ReSurfaced on Main Street, the already-super-popular pop-up space by City Collaborative and company. It’s an exciting time for city-minded folks in Louisville. But what you might have missed, due to its bottom-up, neighborhood-driven focus, is an amazing project at the meeting point between three neighborhoods: Shelby Park, Schnitzelburg, and German-Paristown. The Three Points project, spearheaded by Jennifer Chappell and supported by a host of local residents, artists, and even a Metro Louisville official or two, is beginning to reframe the way urban change is taking place in Louisville.

Three Points, in its official project proposal, described its goal as attempting to “complete a beautification project at the intersection of Goss Avenue and Logan Street that will enhance the revitalization projects already underway in the community and to improve its functionality to residents in the area.” The intersection and, more importantly, the neighborhoods it connects, have been long-ignored by the city. Now beloved by young homesteaders attracted to its affordable and well-kept housing stock and convenient location, these neighborhoods have received an abundance of attention recently in the form of private development: new restaurants, bars, and a 183-unit apartment complex named Germantown Mill lofts, located in the old Booker Building on Goss Avenue.

The goals of the Three Points project are to beautify the area by adding landscaping, painting a large mural, and adding signage. The project aims to improve safety for residents through physical connectivity improvements including walkability and pedestrian infrastructure upgrades. It also seeks to generate a sense of community by encouraging participation by bringing a diverse set of private investors and actors on site for remediation, and by utilizing resident-led design and implementation planning. What’s striking about Three Points, beyond its most visual element—the Logan Street–facing mural on the Abell Elevator building—are the ambitious goals laid out by Chappell. The project is on target to become an authentic community-generated placemaking project that can serve as a model for other neighborhoods in Louisville.

Placemaking is an ideology and a tool of urban planning that has theoretical roots in the works of big-name urbanists like Jane Jacobs and William Whyte in the 1960s and 70s. Their observations are situated around making cities places not just for consumerism or speculative real estate development, but instead as places of social experience and interaction. Many of the projects that emerged from this line of thought were realized as public spaces. The Project for Public Spaces (PPS), for example, has framed placemaking as, “how we shape humanity’s future,” and as a challenge or solution to how humanity has negatively impacted its environment.

PPS lists eleven principles for creating great community spaces. These ideas revolve around variations on the values of community participation, the social construction of space, and the benefits of multi-partnered interventions. The organization employs a model of place based on four core evaluations: Sociability, Uses & Activities, Comfort & Image, and Access & Linkages. Place-making practices have become an international phenomenon, and increasingly popular strategy towards urban engagement.

While Chappell’s plans for Three Points call for less grandiose interventions, she is attempting something with much more potential than the normal top-down city planning initiative. As Chappell described it, Three Points aims to be something more than a beautification project for any one area. It seeks to “embrace the momentum and pride” already located within these neighborhoods. That’s an almost revolutionary ideology in today’s urban planning world. Currently, many city-led projects attempt to “revitalize” what’s been deemed “blighted” with little thought of the effects of price or place to current residents.

Chappell’s project, instead, leverages the community resources already present in these places. She’s activating an existing space with resident resources and labor to build stronger community connections between the people of the three individual neighborhoods. This strategy not only strengthens already existing social relationships but puts residents, who may not know one another, into direct contact, where new relationships can be developed.

The Three Points project also challenges the current funding models of urban interventions in an interesting way. This work was planned without local government oversight, and financed through an a mix of public-private sources. Chappell worked to secure funding for the project by enlisting in-kind donations from friends and local businesses in the area and through a crowdfunding source, Neighbor.ly. She was also able to secure two local government grants from Metro Councilmen Jim King and David Tandy’s discretionary funds.

When asked about how helpful city government had been to the project, Chappell stated, “I would like to encourage people to not only get to know their councilperson, but also get to know their legislative assistants—they are the real movers and shakers.” For Chappell, it was successful relationship building that led to the many successes of this project. Utilizing a mix of public-private funding for urban projects isn’t on its own all that groundbreaking, but for Three Points, public funding wasn’t expected or even absolutely necessary. What was most interesting about this work is that the community retained control over the project’s planning, implementation, and ultimately, how it was funded.

While there are still many questions to be asked about government responsibility in funding urban projects, especially when residents are asked to take on the funding and implementation for work they pay the city to do with tax dollars, the Three Points project remains an exciting new example of resident-led, community-controlled urban design and change.