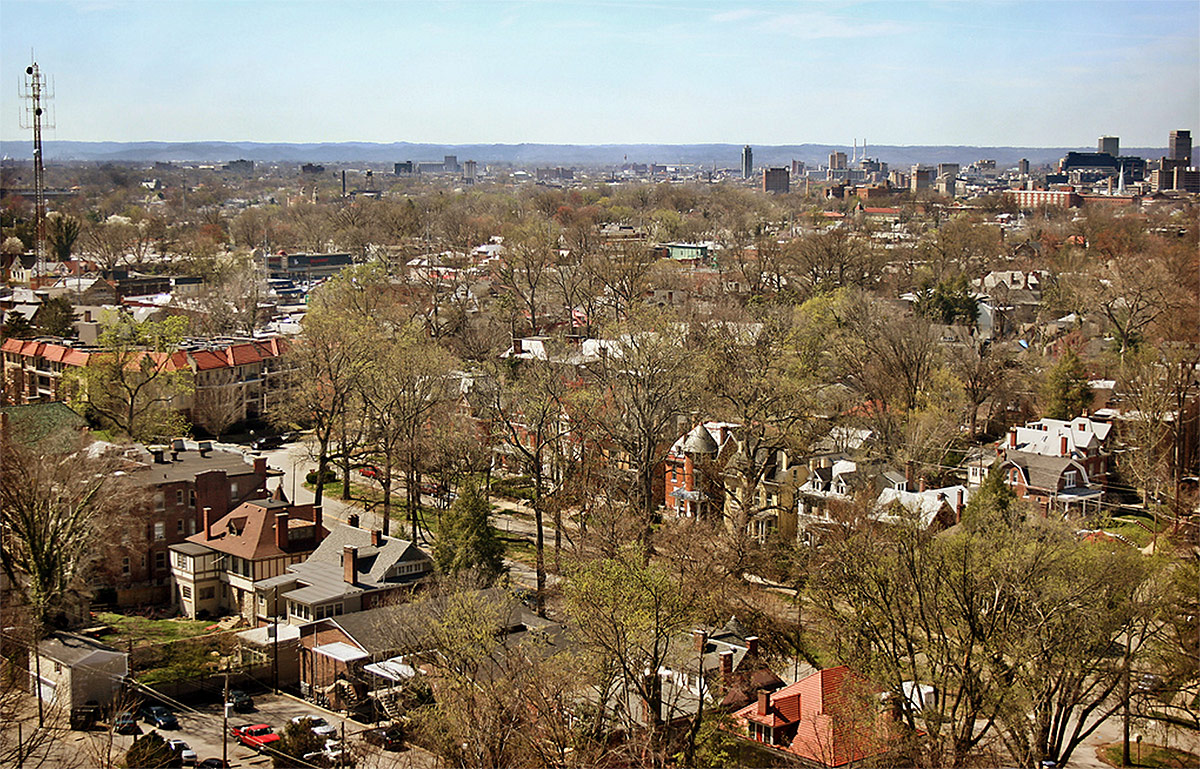 [Editor’s Note: As we gather with friends and family this year on Thanksgiving, life in Louisville will likely be a topic at many dinner tables. These words below are from one of Louisville’s most notable citizens, Owsley Brown II, and reflect profoundly on the city we all love. They pinpoint what makes the place so lovable.

I first heard them earlier this year at a design charrette imagining a better built environment for Downtown Louisville, but they were delivered as a speech several years before. We think they add value to our celebration of giving thanks on this special day. And we’re sincerely grateful to Christina Lee Brown for allowing us to reprint them here. ]

Owsley Brown II, philanthropist and retired chief executive and chairman of Brown-Forman, received the national Woodrow Wilson Award for Corporate Citizenship on June 24, 2011. Mr. Brown was inspired by a holistic view that recognized that quality on the job was inseparable from quality in community life. Acting upon this view, he transformed both his company and his city into rewarding places to work and to live. Brown-Forman, under his direction, led the way in steadily elevating the quality of community life through its support of the arts and culture, of social services, and of a sustainable environment. At the same time, Brown-Forman became the international corporation that it is today.

In his own words, spoken on June 24, 2011, three months before his untimely death at age 69, Mr. Brown shared a vision for the future of the community that he loved and served with passion and enlightenment. Here are his words:

Yesterday, the Wilson Center held a seminar with the University of Louisville on issues facing smaller urban areas like ours.

And so, I thought it appropriate to delve into an issue that has long interested me:
how smaller cities think about their size.

Do they like the size they are and want to perfect things within their present scale?
Or, do they prefer to grow bigger — always a fashionable choice, except for waistlines, of course — even if directing resources to achieve bigness will mean neglecting some of what they now have?

Let’s use Louisville as our example. Why do people like living and raising their families here?

While there are many wonderful reasons, I will focus on one: our fortuitous size.

We are big enough to have great cultural and educational entities and three international Fortune 500 companies. Yet, we are small enough to have a sense of oneness with our fellow citizens.

This sense of community makes us feel responsible for our own destiny. It makes us feel our problems are not of such an overwhelming nature that we’re helpless to solve them.
On the whole, we have a well-balanced, well-sized urban and suburban social system, and one highly satisfying to the human side of our citizens’ lives.

If we conclude that increasing our scale is the wrong choice, we can focus on a highly productive goal — improving the quality of our activities for the good of our present citizens.

If we are happy with our size today, we don’t need to spend limited educational resources on building more school rooms. Instead, we can increase the value to every student in present classrooms.

If we are not trying to create jobs for a future, larger population to fill, then we can concentrate on creating and improving jobs for people who live here now.

One way to accomplish this is to encourage our smaller companies to emulate the revitalization of the manufacturing base, which is happening at Ford and General Electric.

Another way is to invest in adult training and education programs to help people perform at higher levels so they can earn higher pay in their present line of work.

We can improve our existing streets with great engineering and enhance our environment with trees and plants rather than building raw, treeless streets more distant from our center.

If you are interested in the arts, you might think “if our city were bigger, we would have a large enough population to make our orchestra work financially.” But size alone isn’t the answer. Even Philadelphia, a city about twice our size, now has its great orchestra in bankruptcy.

Our orchestra reminds us the arts are a gift of gold to our city, improving our children’s performance at school and stimulating creativity in countless adults, allowing them to better solve their personal, business and community problems. Considering the enormous value the arts contribute to our city, the net cost is modest.

Now let’s look at an example of an old industry: the provision of water for a city.
The bad boy example is Vivendi, a French water company that went in such wild pursuit of size that it even bought Universal Pictures in Hollywood, causing the company to spiral down to near collapse 10 years ago.

Let’s contrast that with our own Louisville Water Company, now 150 years old. When we think of it, we visualize the architectural wonders at the foot of Zorn Avenue, the two magnificent spots in Crescent Hill and recently, the company’s great new office on Third Street.

Right from its 19th-century founding, the leaders of this company wanted to impress and elevate the public perception of the company and its product. They tried to do this via world-class architecture. And boy, did it work!

People liked the new water they got in 1861 so pipes were laid to serve more and more people. The city’s high number of cholera cases plummeted and the company thrived.
Something else happened, too: the excellent architecture not only encouraged employees to do a good job, it also stimulated such creative genius that around 1885 our local water purification techniques became the gold standard — not just for the great river cities of North America, but for river cities far beyond our shores as well. It’s happening again in the 21st century. The company’s cutting-edge, sand-filtration tunnels are the first of their magnitude in the world.

Something similar happened at our company, Brown-Forman. For years, people said “you need to be bigger to compete, so merge. Only the big can survive.”

Instead, we concentrated on serving our long-term investors by creating and producing products of such appealing quality that they would be desirable to our consumers, regardless of how small our company was.

Let me give you some facts: Forty-three years ago when I joined a much smaller Brown-Forman, there were five giant distillers dominating our industry. Their big scale bred arrogance and complacency and even a sense of entitlement rather than any net strategic advantage. Not a one of those giants survives today. Not a one.

At Brown-Forman, our focus on quality rather than bigness also had a remarkable side effect: as more people around the globe discovered our wonderful products, the more they wanted them. So we did grow and we grew greatly! It hasn’t stopped yet, thanks to Paul Varga and his amazing team!

One thing is clear to me: pursuing size for its own sake is a very poor choice.

In my view, there is much worthy work for all of us to improve qualitatively every aspect of our citizens’ lives.

Our beloved city might get bigger over the decades because we have gotten better, but it is highly doubtful that we will be better off just because we tried to get bigger. This is a liberating idea. If we accept it, it frees us from wasting time bowing before the Idol of Size.

Let’s work together to use this liberating energy so well that our city will serve as a model for cities of all sizes throughout our country and even the world. Thank you so much!

The Woodrow Wilson Awards recognize leaders who have worked tirelessly to improve the quality of life of those around them in the spirit of U.S. President Woodrow Wilson. Founded by an act of Congress in 1968, the Woodrow Wilson Center of Washington, DC, is part of the Smithsonian Institution. The Corporate Citizenship Award honors executives whose examples and business practices demonstrate that concern for the common good is inseparable from concern for the bottom line.

At Brown-Forman Corporation where Owsley Brown II helped carry a family legacy into its fourth generation, a tradition of business excellence dates to the company’s founding in 1870 by his great-grandfather, George Garvin Brown. The company’s first brand, Old Forester, was America’s first bottled bourbon.

Beginning in 1968, Mr. Brown worked his way up the ranks of the family business, becoming chief executive in 1993 and chairman two years later. Under his leadership, the Louisville liquor company introduced new products and expanded its brands into global markets.

At home in Louisville, Mr. Brown and his wife, Christy, played leading roles in the restoration of the Cathedral of the Assumption, the development of Actors Theatre, the Fund for the Arts, the Festival of Faiths, the Muhammad Ali Center and the revitalization of the waterfront, as well as an infinite number of other worthy arts and civic endeavors spanning four decades.

Mr. Brown, whose favorite drink was Old Forester Bourbon over ice with a splash, was a transformative agent in his business and community, where he was admired and respected.

For Christy, the person closest to him, Owsley Brown II was a “holistic thinker” and “the most extraordinarily brilliant gentleman I know. I would have followed Owsley anywhere.”