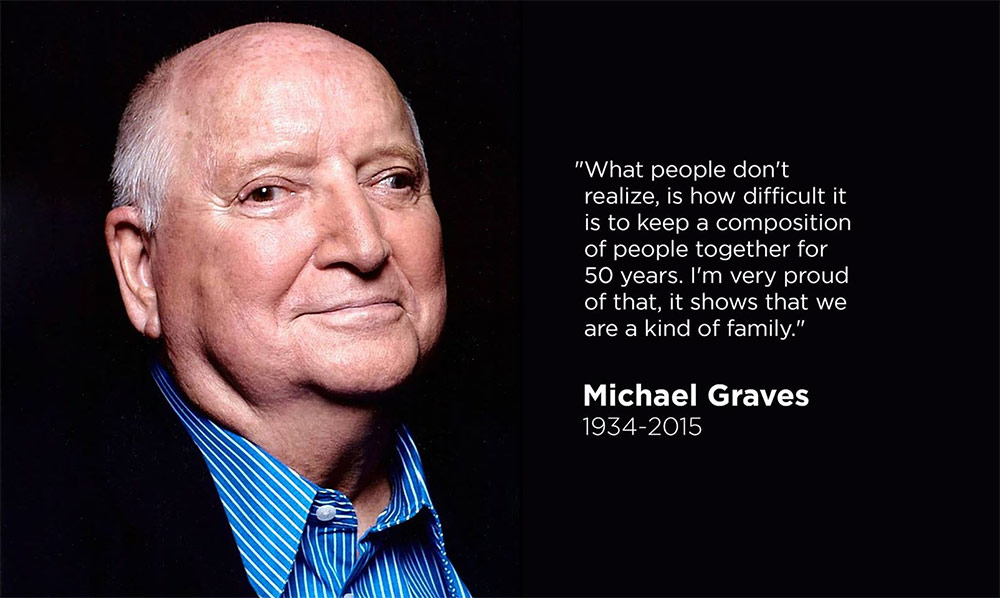 Internationally renowned architect Michael Graves died Thursday of natural causes. Graves has designed over 350 buildings, but among the most important commissions was Louisville’s 26-story Humana Building. His design was groundbreaking for its responsiveness to its historic context, evoking a ferry boat on the Ohio River while referencing the proportions of Classical architecture and stepping back to respect the height of Main Street’s 19th century architecture. The building also shunned the street-killing plaza, instead occupying its entire site, a radical move for 1980s skyscraper design. Several years ago at a lecture marking the building’s 25th anniversary, Graves quipped that the stark National City Tower was the box the Humana Building was delivered in.

Humana has been thought of as the real test for Mr. Graves. For this is his largest urban building, the sign of how well he can make the move from small-scale buildings to large ones. And beyond its significance for the reputation of Michael Graves, Humana is a striking example of a large, prosperous corporation seeking to build a headquarters structure that would stand as a statement against conventional, modernist corporate architecture. It is surely the most ardent such statement since A.T.&T. commissioned Philip Johnson and John Burgee to build its split-pediment-topped granite skyscraper in New York City – a building to which the new Humana headquarters will inevitably be compared.

Graves was equally at home designing tea kettles, toasters, and candlesticks and has become a household name through his work with Target and JCPenney. In his later years, he added a new focus of healthcare and disabilities design, building houses for wounded soldiers, designing a line of hospital furniture, and adding his signature touch to a series of canes.

It is with deep sadness that Michael Graves Architecture & Design (MGA&D) announces the firm’s Founding Principal Michael Graves has passed away today, suddenly and peacefully, of natural causes. He was at his home in Princeton, New Jersey.

Of all of his accomplishments, Michael often said that, like his own family, his proudest creation was his firm. As we go forward in our practice, we will continue to honor Michael’s humanistic design philosophy through our commitment to creating unique design solutions that transform people’s lives.

The architect was among an influential group called the “New York Five” that helped usher in the Postmodern era of architecture. (See him dressed as the Humana building with the rest of the New York Five here.) Among his achievements is an Honor Award for the Humana Building, the Driehaus Prize for Classical Architecture, the Nation Medal of the Arts, and the AIA Gold Medal