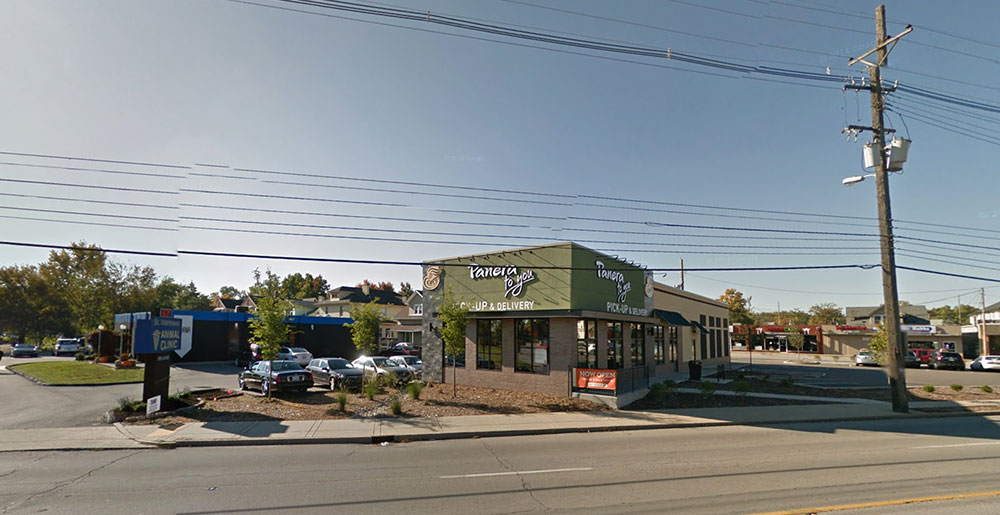 A Panera Bread location at 4024 Shelbyville Road, across the street from Trinity High School where St. Matthews just begins to show signs of walkability, wants to build an outdoor patio for people to sit and enjoy coffee or sandwich. But there’s a problem. An annoyingly predictable problem: parking.

The store is among the St. Louis–based chain’s newer “delivery & take-out” concepts, which are smaller and without dedicated indoor seating meaning they usually have fewer parking requirements. In this case, the store has 20 parking spaces.

According to the Courier-Journal, St. Matthews officials are worried the patio will create more traffic and add to congestion in the area. The patio will require a parking waiver to move forward, but officials delayed action at a January 13 meeting. The issue will be revisited tomorrow, January 27 at 7:00p.m. at St. Matthews City Hall, 3940 Grandview Avenue.

“At certain times, parking is difficult at Panera,” St. Matthews Mayor Rick Tonini told the newspaper. “If there’s seating there, people are going to be staying longer.” And heaven forbid we ever create places that would encourage people to linger. According to the C-J:

No current parking would be eliminated. But the waiver would reduce the number of required spaces to 20, the number available now, including three street spaces and two leased spots at a nearby animal clinic.

The parking standard for carry-out sites is half what it is for a sit down restaurant, and the number of required spaces goes up if seating is added, Jack Ruf, the city’s sign and zoning officer, said.

Jim Calvery with Nicklies, who was at the meeting, said this week that his company had received requests from business neighbors and pedestrians to add seating. He said it’s a “pedestrian-driven” site — not a place for people to drive up and “hang out” — and that he doesn’t expect the seating to generate a lot more vehicle traffic.

Parking is all too often the downfall of many positive developments in Louisville. What do you think? Should we make Shelbyville Road through the heart of St. Matthews a walkable place? Will this outdoor patio lead to more congestion or can it help to change the tone of the auto-dominated strip?