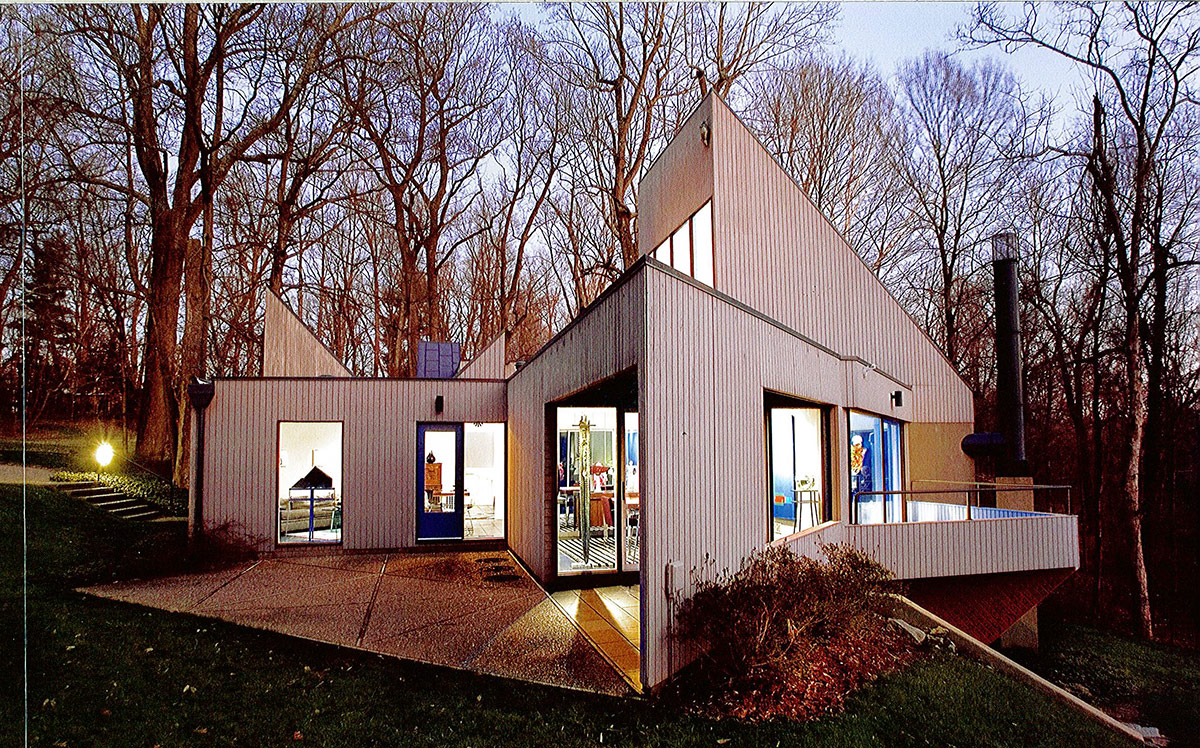 These architectural elements line suburban streets throughout Jefferson County. There are a select few residents, though, that prefer something else entirely—a healthy dose of modern design. And there’s incredible variety among the modern houses of Louisville, from simple, box-like architecture, to eclectic design, to others employing sculptural massing and varied geometry.

The Leight House is one of the latter, standing as one of the city’s most forward-thinking modern residences in the Glenview neighborhood.

The Leight House (pronounced ‘Light’), built in 1967–1968, showcases a fascinating composition of shapes and surfaces, angles, rectangles, solids and voids. It’s the product of its passionate artistic owners—Adele and Dr. Leonard Leight—and the skilled team of local architects they asked to design the house.

“The vertical, wood-sided Leight House steps down a densely forested hillside, while peaked, ribbed metal roofs bring sunlight to the rooms below,” The Louisville Guide said of the Leight House. “Thus the house is a series of clustered volumes that are united by a single horizontal volume. Four primary hoods project above the roofline, the function and scale of each unique to the room below.”

The Leight House’s interior, appropriately enough, dominated by a sense of light. This is a residence designed around the qualities of its interior spaces, giving the dwelling the feeling of being a jewel-like museum.

Inside, a colorful art glass collection that the Leights have assembled over many decades adds visual interest to the rigid geometry. Sunlight fills the house, reflecting off the glistening artwork, floors, walls, and ceilings.

“I remember seeing a house that Marcel Breuer had designed in the garden of the Museum of Modern Art,” Adele Leight is quoted as saying in Peter Morrin’s book, The Leight House: The Home and Collections of Leonard and Adele Leight. “It was the first time I saw a modern house. That was 1949.” Two decades later, she had a distinctive modern home of her own.

Ward is also noted for his parking garage design, which took an otherwise bland and boring typology and added a distinct layer of design. Those include the Federal Garage at Seventh and Magazine streets; the County Garage at Sixth and Cedar streets; and City Garage (in association with Luckett & Farley) on Sixth near Main streets.

Ward’s studio included a team of talented young architects, where he fostered and encouraged their collaboration. This resulted in many award-winning projects around the city. That collaborative approach took root at the Music School at the Kentucky School for the Blind, where Ward’s associate, Robert Kingsley, is credited with the notable building. The old City Blueprint building (now the Love Boutique) at Second and Jefferson streets is, likewise, a team effort with Fred De Santo acknowledged as the lead designer.

For the Leight House, Ward initially presented a three-story concept that the Leights did not prefer. Then, De Santo made the next attempt, and developed the scheme that ultimately was constructed.

Several books have featured the Leight House, and the Leights are well-known within the artistic community. Louisville is fortunate to have such exceptional patrons of modern art and architecture.

[Top image by Ted Wathen from the book The Leight House: The Home and Collections of Leonard and Adele Leight, published by Butler Books. More information available here.]

[Correction: An earlier version of this article misspelled Fred De Santo’s name. The article has been updated.]