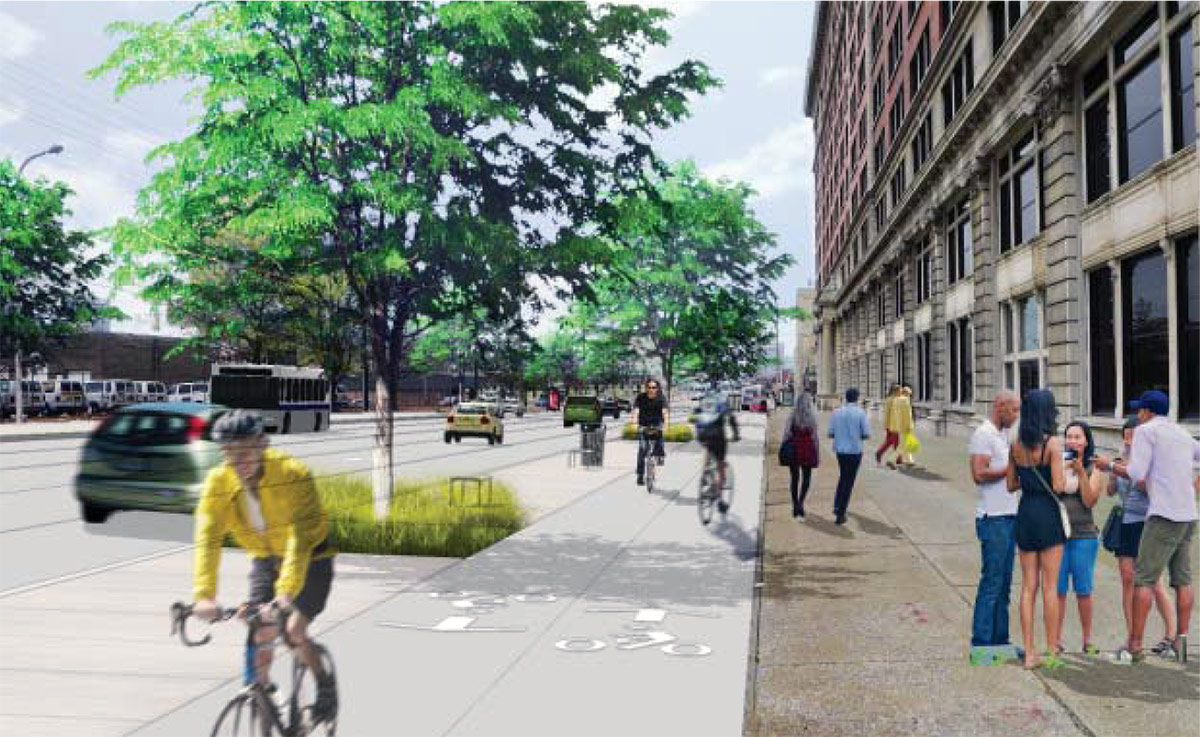 The newly released Move Louisville 20-year transportation plan is full of ambitious ideas for the future of the city. Among its recommendations are 16 priority projects that the city hopes to see built in the next two decades.

Some are already underway, like planning for a makeover to Dixie Highway or a road diet on Lexington Road, but others are new ideas, like making Broadway a complete street or redesigning the intersection of Story Avenue and Main Street.

We like most of what we see here, with three notable exceptions: plans to build new roads with the intention of spurring development in rural parts of Jefferson County. No more sprawl, please! But the other 13 ideas make a lot of sense.

We’ve listed all 16 of Move Louisville’s priority projects below, using the language from the pages of the Move Louisville report (Click an image to make it larger). Take some time to peruse the projects and let us know which ones you’re looking forward to in the comments below.

And while you’re at it, please take time to drop a note to Metro Louisville during the plan’s public comment period to let them know that you support boosting transit and walkability and don’t want to see any more sprawl. The public input form is at the bottom of this page.

A clear east-west/cross-town transit connection was a top request during the Move Louisville process and a top need for citizens and employers. A cross-town route connecting Dixie Highway to Westport Road has the potential to connect major work places around the city – from Riverport to UPS and from the Renaissance South Business Park to the Bluegrass Commerce Center – allowing easier and faster access from residential neighborhoods to job centers. Two major routes are proposed, one just inside the Watterson Expressway and one just inside the Snyder Freeway. Improved roadway connections, stop improvements and perhaps even new rights-of-way will be needed to implement clear and functional transit routes. Additional funds will be needed to cover the operational costs of these new and improved routes.

Dixie Highway is one of Louisville’s major economic corridors and one of the most densely traveled, carrying the highest number of transit users in the system (when the Dixie- Preston route is considered as a whole). The corridor also is one of Louisville’s most dysfunctional and dangerous, with a fatal crash rate that is over 3 times the rate of similar roadways nation-wide. A redesign and rebuild is necessary

to create a safe, efficient and economically successful multi- modal corridor. The state has funded the first 2 phases of improvements to the corridors, and Metro received a US Department of Transportation TIGER grant for assistance in the installation of a BRT line. Additional funds will be needed to cover the operational costs of these new and improved routes.

Move Louisville recommends a complete street retrofit of Broadway from Shawnee Park to Baxter Avenue to include fixed guide-way BRT, two-way cycle track and pedestrian safety improvements. The project scope should include the following:

While the land uses along Preston are not yet fully supportive of premium transit, much of the Preston corridor has the fundamentals for infill development that could allow it to transform over time into a true premium transit corridor.

In the short term, improving frequency and running times through approaches such as limited peak hour bus lanes and consolidated stops will help to maximize transit ridership and improve choice along the corridor.

Transportation infrastructure is the key to unlocking this ideally situated undeveloped parcel of land. With multi-modal streets and a planned mixed-use, multi-generational dense development, this site – the largest of its kind in the city – could be transformed into a district of superior urban quality, livability and accessibility. New bridges and roads also have the potential to ease congestion in the area and provide new connectivity points. A mixed-use development plan has been approved for the site. Public investment in the infrastructure for this opportunity should be linked to significant density and a mix of uses.

Completing the planned extension of Urton Lane from Middletown to Taylorsville Road, will provide a long-needed local thoroughfare expediting the movement of goods and services and facilitating shorter and more efficient commutes for residents working and doing business in the area.

The rapidly-developing area around the newly opened Parklands of Floyds Fork will bring network connectivity issues. Transportation should be addressed holistically to accommodate new development and all modes of travel where appropriate. It is anticipated that many of the larger projects will be focused on Interstate improvements. For example, a new interchange and connector road from KY 148 to US 60 (Shelbyville Road) on I-64, will greatly increase accessibility. Strategically improving existing rights of way and building a limited number of new connector roads will accommodate access to the Parklands of Floyds Fork and adjacent areas.

Conversion of one-way streets to two-way streets and improved maintenance of the street, bicycle and pedestrian networks will support reinvestment throughout West Louisville. Investments along Muhammad Ali Boulevard and Market Street near the West Louisville Food Port provide an example of how transportation infrastructure can support private development.

Louisville’s downtown street network should be converted from one-way to two-way to increase the livability of the affected neighborhoods for both residents and visitors. Studies show that regardless of the size of the city, a one- way to two-way street conversion increases the efficiency of downtown networks, enhances economic activity and creates more walkable neighborhoods. The related conversion to two-way movement of Mellwood Avenue/Story Avenue and of 15th Street/16th Street – each made one way decades ago during construction of I-64 – will further support revitalization in the edge neighborhoods of Butchertown, Smoketown, Portland and Russell.

Extending River Road westward from its current terminus at 7th Street will provide connections between east Louisville/ downtown and the Portland and Russell neighborhoods, and the future Waterfront Park Phase IV. Improvements to the existing portion of River Road need to make the road safer for all modes of travel.

The Ninth Street and the I-64/Ninth Street Interchange create a wall between downtown and the Russell and Portland neighborhoods. Reimagining the Ninth Street corridor as a true urban boulevard will preserve access to downtown Louisville and West Louisville while potentially creating nearly 10 blocks of development opportunities within and near the over-dimensioned footprint of the existing interchange and redevelop opportunities throughout the corridor.

The eastern terminus of Main Street is oddly designed, difficult to understand and unsafe for pedestrians. The reconstruction of the intersection at Story Avenue, Main Street and Baxter Avenue will improve safety and support the two-way operation of downtown streets. The project also supports economic development in the Butchertown, Phoenix Hill and NuLu areas.

Sidewalks are the building blocks of an effective pedestrian network. There are currently more than 2,000 miles of sidewalks in Louisville Metro, yet many areas in the city do not have sidewalks at all. Metro is committed to increasing the connectivity of sidewalks by adding 150 miles of new sidewalks along corridors with high pedestrian demand. Examples of corridors include Dixie Highway, Preston Highway and Newburg Road

Reducing VMT, increasing the use of alternative transportation modes and acheiving the corresponding health improvements requires providing more options for short trips. Added to the goal of reduced VMT, Louisville residents expressed a desire to get around the city by bike. A network of extensive, yet inexpensive and relatively easy- to-implement bike facilities – connected to transit – in the downtown and the central neighborhoods is a logical first step. A strong, connected core network will also support the success of the city’s bike share program.

The Louisville Loop is a shared-use path system of more than 100 miles around Louisville Metro that will connect residents and visitors to parks, jobs, transit, schools and other destinations. The Loop network will also include connections via the Olmsted Parkways and other connecting trails. By early 2016, approximately 50 miles of the Loop has been completed. However, additional funding is needed to design and build approximately 65 more miles.