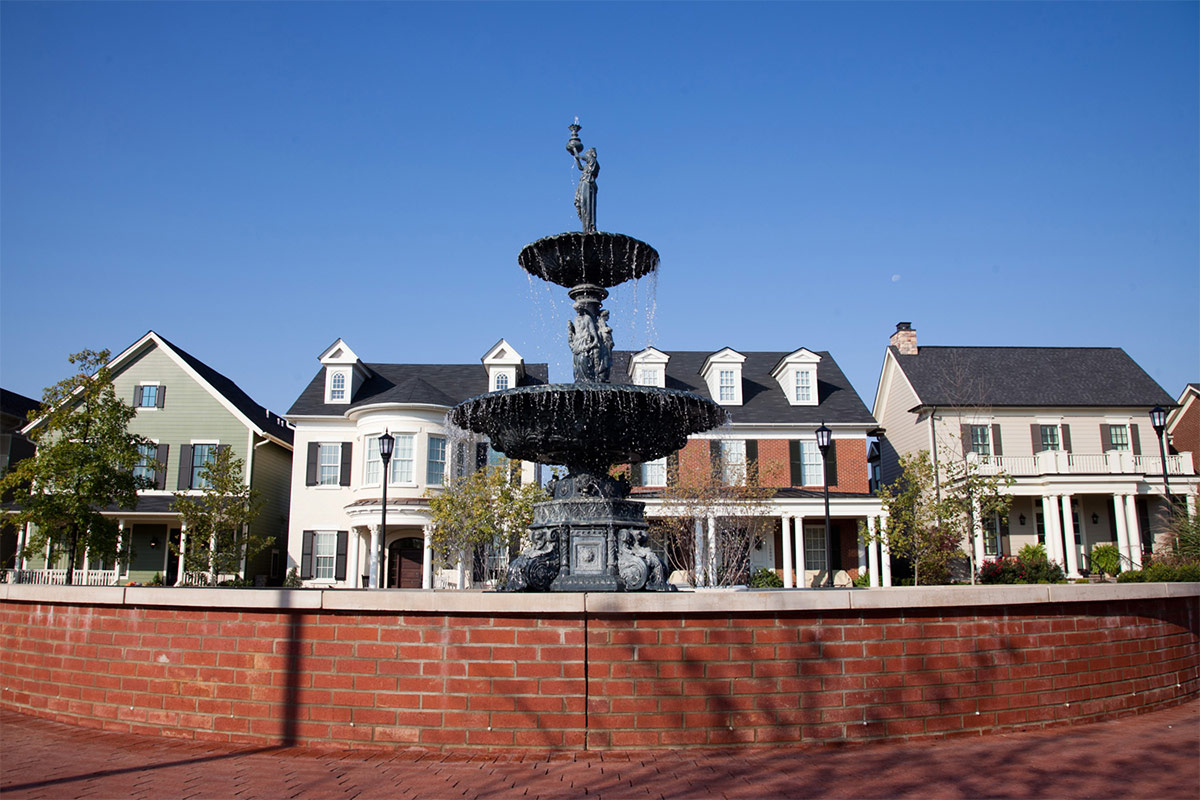 So-called New Urbanism is a modern day planning term that refers to old-style methods of community design. In other words, New Urbanism integrates a mix of residential and commercial functions into the same development, just like core city neighborhoods when they were built a century or more ago.

Think the corner stores in Old Louisville, the varied streetscapes of the Cherokee Triangle, or the commercial streets of the Highlands. New Urbanism is city building the way we used to do it.

While New Urbanism is first and foremost about a pattern of building in a compact, walkable way, the term often brings to mind traditional building aesthetics that populate older city neighborhoods. While there’s nothing that says a New Urbanist development couldn’t be packed with cutting-edge modern architecture, most developments use the old styles as way to connote the traditions of decades past.

In fact, a lot of Norton Commons is meant to evoke a sense of history even though the neighborhood is still quite new. Besides historic architectural styles, even street names set the tone. Meeting Street, the main drag through Norton Commons, is clearly a nod toward the main street of historic Charleston, South Carolina.

Norton Commons is Louisville’s preeminent New Urbanist development. It was designed by architecture and planning firm Duany Plater-Zyberk & Company (DPZ), headed up by the husband-and-wife team of Andres Duany and Elizabeth Plater-Zyberk.

DPZ is the foremost practitioner of this form of planning. The firm also created the nation’s most recognized New Urbanism town: Seaside, Florida, which you might recognize as the set of the movie Truman Show. Duany and Plater-Zyberk have crafted dozens of similar communities around the country since then.

A walk (or drive) through Norton Commons is like being transported back in time to the late 1800s when life was simpler and houses actually had front porches for people to sit out and foster a sense of community. While plenty of Louisville’s great older neighborhoods have already mastered these principles of urbanism, the way we build today has largely forgotten them.

While this style of building was taken for granted a century ago, it has required a lot of effort and scrutiny to bring back today. Designers have created “pattern books” that describe how buildings should relate to the street—i.e. how far from the sidewalk a porch can be to allow people to talk comfortably—and how scale should relate to one another.

It seems simple, but New Urbanism represents a fight by dozens of architects and planners over the past several decades. And in Norton Commons, this new way of city building is on full display. All the amenities of a real neighborhood—restaurants, shops, offices, playgrounds, and more—are within walking distance, creating a comfortable lifestyle for all within its cozy confines.

New Urbanism—and Norton Commons—has its detractors who label the concept as “green sprawl” since this is still new construction in suburbia. Norton Commons, after all, was built on a former horse farm.

Others have derided it as “drive-to urbanism” that does little to cut dependency on the automobile. It can be an excruciating task to drive out to Norton Commons on overcrowded arterial highways just to have a pleasant place to walk and shop.

Still others deride the false sense of history such a place evokes. The neighborhood hasn’t had the luxury of a century of patina as do the Highlands and Old Louisville, and we’re not used to seeing this type of shiny new architecture.

And while there’s some truth to those criticisms, there are valuable lessons taking shape in Norton Commons that we’d do well to learn from in building the rest of the city, whether on the suburban periphery or right in the middle of Downtown.

While it is expensive, Norton Commons isn’t some whitewashed version of a perfect Mayberry community. It’s a real-life functioning “village” in which residents could, quite feasibly, have nearly all their daily needs met.

More importantly, Norton Commons is teaching many Louisvillians to be urban again. While many a suburbanite might not commit to living in Old Louisville, Norton Commons brings the urban form out to the suburbs—and it teaches a new generation to appreciate walkable living. Living in a walkable neighborhood today, for the most part, requires you to live in a historic property. And while we all love Louisville’s historic architecture, many people do not want to commit to the maintenance and upkeep that a historic house entails.

It also shows builders how to build new structures in the old tradition. And it shows there’s a strong demand for this kind of construction—there’s a reason Homearama is making a repeat appearance in the neighborhood. We’d hope that builders across Louisville could look to Norton Commons for inspiration in building in an urban way elsewhere in the city.