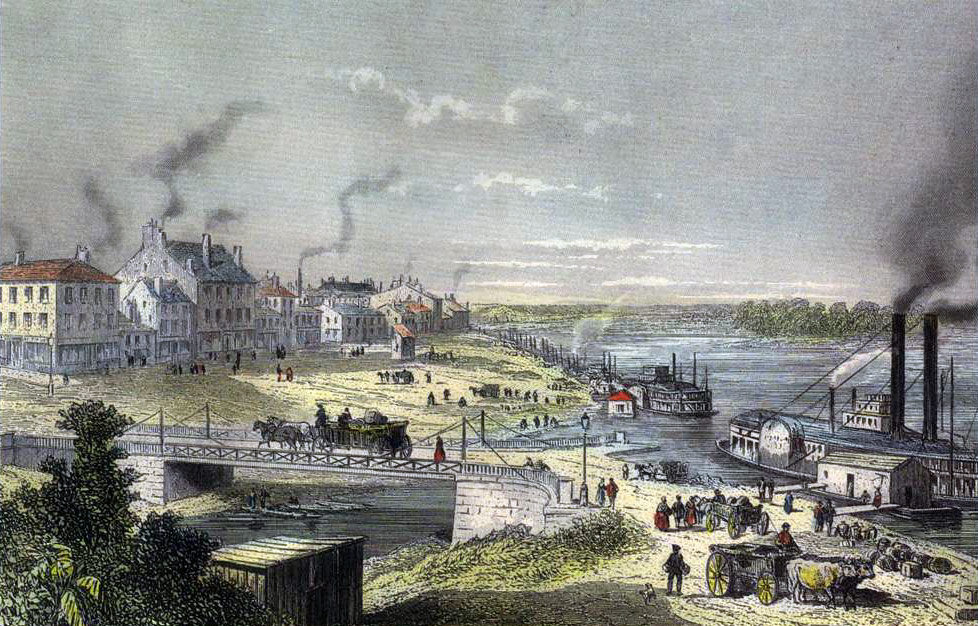 Centuries ago, Louisville’s Central Business District (CBD) was planned with a “linear” layout, as opposed to a “compact” one. Instead of concentrating development around one dominant location and radiating outward, development was dispersed and not economically connected in a strategic manner.

This planning pattern manifested itself along a long growth spine at Fourth Street, beginning at the Ohio River to the north and running all the way past Old Louisville to the south. From either side of Fourth, Louisville became spread out, east and west.

Unlike neighboring Indianapolis and Cincinnati, which have very defined centers—Monument Circle and Fountain Square—and are functionally organized, Louisville, historically, was never developed into a similarly grand plan.

Cincinnati and Indianapolis had a strong urban planning process from the start. Fountain Square and Monument Circle were defined early, and civic leaders maintained and enhanced this central focus for decades—and still do.

Louisville does have a good government center roughly surrounding modern day Jefferson Square. That green space is surrounded by City Hall; the old Courthouse, now Metro Hall; the Judicial Center and Correctional Facility; the old jail; and the Hall of Justice. But this notion of a single-use civic center emerged much later and lacks the varied ingredients that make a vibrant city.

The economic engines—retail, hotels, offices, etc.—did not develop concentrically around this core or were scrubbed clean and demolished. Before we had Jefferson Square and the PNC Tower, we had the Realty Building and the Willard Hotel on this site.

This essential mix of uses follow linear east-west routes in the age of the steam boat, mainly along Main and Market streets, and then shifted away from the river to Fourth Street from Main to Broadway. While business boomed along these corridors, there was no “center”—no place one could point to as the center of town. Had such a center existed from the beginning, a more vibrant synergy could have spurred more economic activity in the city’s core.

This urban pattern may have evolved from the very beginning, when George Rogers Clark arrived in 1778. He confiscated a land grant from John Connelly, who mistakenly decided to side with the British in the Revolutionary War. That grant covered most of what is today considered Downtown Louisville.

This wide street was originally called Dunkirk Street and later renamed to Prather Street in honor of a prominent civic leader, Thomas Prather. Today that wide boulevard is known as Broadway.

The original plan also included a prominent landscaped “commons,” a sort of linear park running along the narrow block between Jefferson and Liberty streets. Prior to being renamed to Liberty in 1917 (a patriotic maneuver during World War 1), this street was known as Green Street since it ran along this park-like series of blocks.

A city graveyard was shown aligning with those blocks on the west edge of town, today the only remaining original green parcel left, although Baxter Park and Jefferson Square are not also in alignment.

Whatever happened to that landscaped “commons” between Jefferson and Liberty streets? To pay off city debts, most of the what would have been a pioneering green space at the time was sold for private development.

Louisville’s numbered street system also shows a few quirks from this early layout. In most river cities—Cincinnati, St. Louis, or Memphis, among others—the numbered streets (First, Second, Third, etc.) are positioned parallel to their adjacent river. In Louisville, strangely, the numbered streets are located perpendicular to the Ohio River.

This created some confusion and orientation problems for new residents and visitors to the city. Trying to give directions to out-of-towners along Fourth Street is challenging, and the numbered blocks helped people understand how far they would have to walk. Most locals, for instance, don’t know how many blocks there are from Main Street to Chestnut Street (answer: five) in order to determine if one should walk or take a cab to the Palace Theater.

Over the next hundred years, the city expanded along Fourth Street from the river to Broadway, which had come to exemplify the high fashion of Louisville’s wealthy citizens. It was here that the city’s elite built their elegant mansions.

Families like Avery, Ford, Newcomb, Vogt, and Brandeis were among those who called the street home. All but one of Downtown’s elegant residences have since been bulldozed for lesser quality buildings and parking lots. The lone survivor is the grand old Brennan House on Fifth Street.

Several nodes of concentrated activity did form around Downtown, including the Theater District (Fourth between Chestnut and Broadway), the Government district (around Sixth and Jefferson, surrounding what today is Jefferson Square), and various business hubs along Main and Market streets. And one day, one of these hubs may come to represent for Louisville what Monument Circle and Fountain Square do for Indianapolis and Cincinnati, but we’re still largely a city without an official central point.

What’s Louisville’s “center” to you? Where should the central point or public space of the city be? Share your thoughts in the comments below.