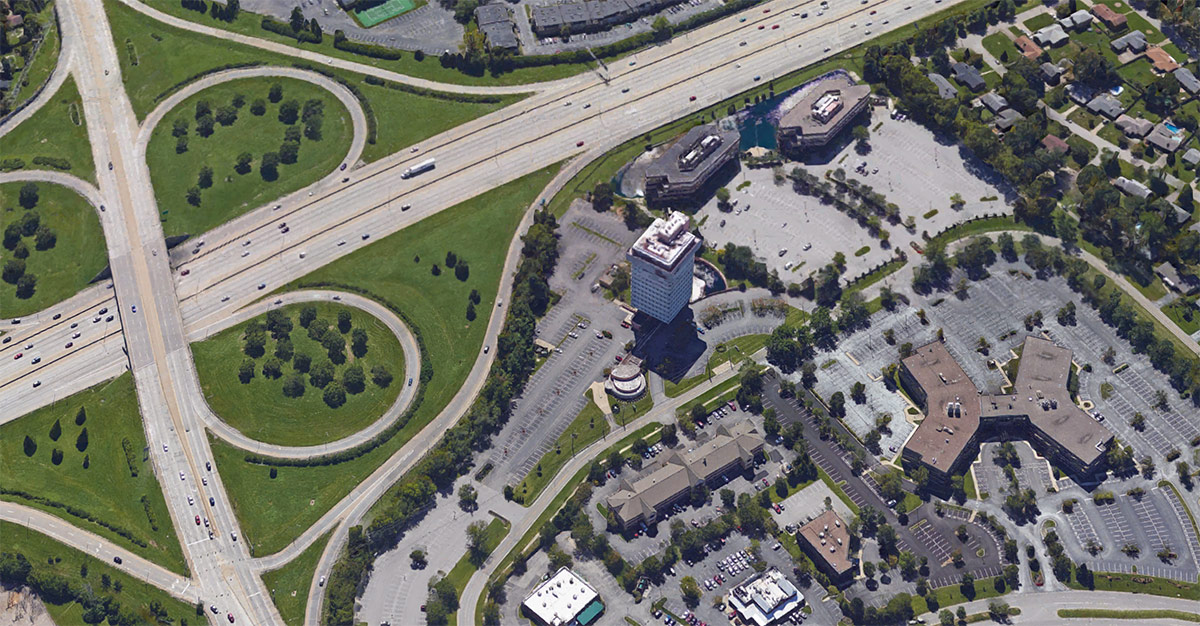 In 1964, Lincoln Income Life Insurance built the first major office in the suburbs at Breckenridge Lane and the Watterson Expressway. The resulting skyscraper is better known today as the Kaden Tower.

Completion of the structure signaled a significant shift in Louisville development‚ in effect serving as a billboard that the suburbs were open for business. Downtown was no longer the only place in which to build your company’s headquarters.

Besides locating hundreds of office staff in a remote site, away from other amenities like shops and restaurants, Lincoln built a world-class landmark designed by Taliesin Associates—the successor firm to the internationally acclaimed architect Frank Lloyd Wright.

The tower’s unique suspended-cable structural system flips construction upside down. Instead of building traditionally from the ground up, this feat of engineering suspends the tower’s floors down from an upper truss framework, a major technological innovation at the time.

Other distinctive design components include a glass elevator that offers a dramatic ride up the side of the tower, a top-floor observation deck, and a spectacular, lower-level auditorium that has a sweeping view of a surrounding outdoor pool.

And while notable and impressive, one can only wonder how much greater the impact might have been if the tower had been centrally located in downtown? It certainly would have strengthened the business district when it needed it the most.

There are other prominent national and international headquarters in Louisville that are located in isolated, out-of-the-way places. Yum! Brands and KFC also chose to build alongside the Watterson, in a hard-to-find spot. And, to find the campus of Papa John’s Pizza, you’d need a GPS device.

What if these two high-profile companies were located in a prominent address, serving as anchors in a walkable part of town? How many restaurants, shops, etc., would they have supported? While both have signature arenas and stadiums named after them, it is challenging to find one of their restaurants in the core city.

There are plenty of other examples of major companies located on the suburban and exurban periphery. UPS’ Air division is located in a generic office park off Hurstbourne Parkway. Churchill Downs is another, more recent, local giant that placed offices well outside of Downtown or even its Central Avenue track. One division of the company now occupies a shiny suburban office building on Hurstbourne Parkway near Shelbyville Road.

And others are still building new headquarters outside the city. In January, for example, Thorntons broke ground on its new HQ, termed a “Store Support Center,” on Old Henry Road in eastern Jefferson County. The nearly $30 million investment doubles the size of the company’s current suburban offices on Linn Station Road.

Fortunately, other corporations have invested heavily within the urban core over the years. Some of those include Humana, Kindred, and Aegon (formerly Capital Holding, which has since downsized and relocated).

At a time when corporations across the country embracing urban headquarters as a tool to attract the best talent, most notably with GE’s move from the Connecticut suburbs to downtown Boston, what would Louisville look like if we had a centralized corporate structure?

The synergy and density of multiple headquarters in downtown could create an environment of growth and vitality for all of Louisville, which in turn leads to a better place to live and call home.