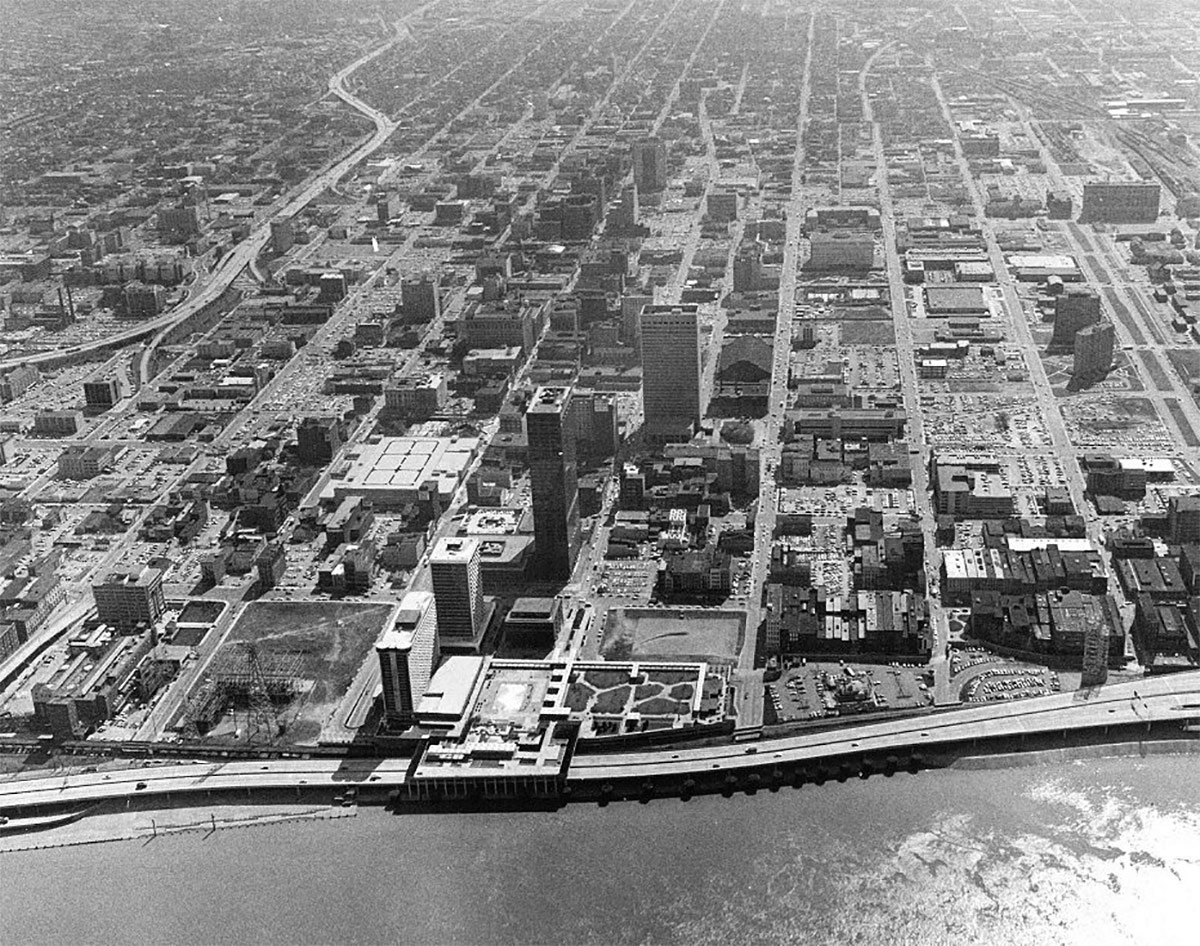 A policy that was intended to improve the quality of life for city-dwellers actually resulted in expediting the social and cultural deterioration of urban Louisville. We’re talking about, of course, the now-infamous urban renewal programs of the mid-20th century. Above: A figure-ground map of Downtown Louisville circa 1900 and again in 1990.

Large swaths of Louisville’s Downtown were essentially “scrubbed clean” of any existing structures and replaced by acres of asphalt surface parking lots and generic, bland buildings.

The poor were relocated to barracks-style housing west of Ninth Street that lacked any neighborhood appeal and shunned the variety of uses that made cities tick. In case after case, in city after city, these policies of relocation have failed the public good. What once was a thriving, vibrant African American district along West Walnut Street (now Muhammad Ali Boulevard) was bulldozed and leveled creating a canyon that exacerbates Louisville’s so-called Ninth Street Divide. Only the Mammoth Life Building (aka River City Bank) remains, although its distinctive masonry exterior has been hidden by a fake metal facade.

Above: A view looking south from the Glassworks building before urban renewal circa 1926 and the same view after clearance in 1976.

Urban renewal did not spare the Central Business District, either. The area marked in the photo below was razed of almost all its historical buildings except for a few landmarks such as Actors Theater, the Levy Brothers Department Store, and Vincenzo’s restaurant.

One avid proponent of “urban removal” even encouraged bulldozing all of West Main Street from Sixth Street to Ninth Street. What is now one of Louisville’s most desirable urban streetscapes, West Main Street, would have been demolished if this prominent developer had his way. What were these civic leaders thinking from the 1950s thru early 1970s?

One positive, though, is that Louisville is always a bit slow in implementing big projects. We are fortunate that urban renewal ran out of steam in the early ’70s, sparing West Main as well as most of Old Louisville to the south. We have been infilling these ugly scars ever since with parking garages and hotels.

Now 40 years after this blight-producing program ended, Louisville is starting to regain a sense of urban density that it once had over 70 years ago. But there’s a long way to go.