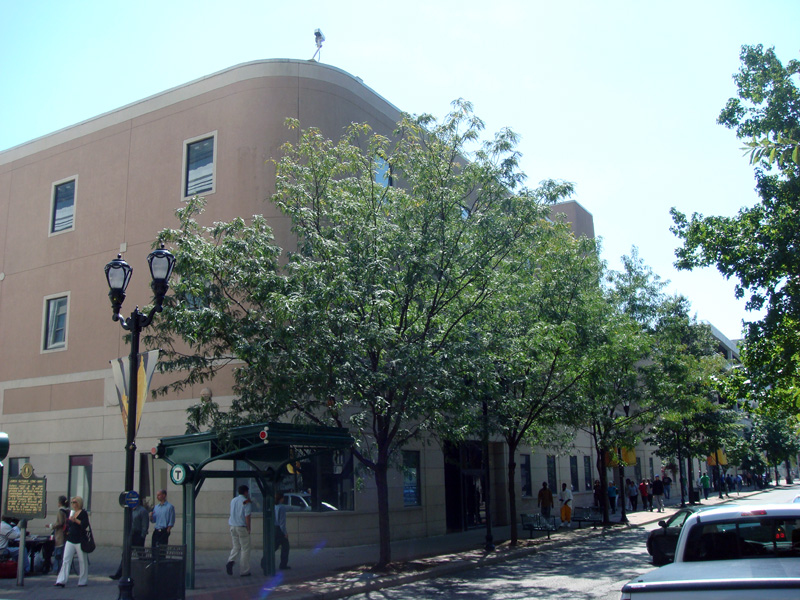 Jewish Hospital is getting serious about selling the old J.C. Penney Building on the corner of Fourth Street and Guthrie Green. Earlier this year, the hospital was considering keeping the building and giving it an exterior face-lift, but it now looks like the hospital will continue to seek a buyer. The building in question is three stories and clad in pink synthetic stucco and last operated as a department store in 1982. An identical neighboring two-story building called the W.T. Grant building is seamlessly clad in the very same pink stucco and is not part of the deal. It will remain as offices for Jewish Hospital. JH Properties also owns the parking garage on the corner of Fourth Street and Chestnut Street.

The building is just over 66,000 square feet over three floors and is listed at $2.3 million. The original brick facade allegedly still exists underneath the pink stucco and styrofoam, but there’s no telling what condition it might be in. Any buyer would be advised to revamp the facade ASAP, probably scrapping the brick for glass anyway. Here’s that catch, though: Jewish Hospital will retain the building’s basement for its own use and the buyer will own only the three floors above grade. That’s still a lot of space to make into, say, an entertainment complex. That’s what the Cordish Companies thought back in 2005 when it announced it had purchased the property for an extension to 4th Street Live. They even paid a $75,000 non-refundable deposit before the closing date in March 2006. They had promised to have tenants in the building within 18 months. That deal obviously fell through leaving one of the most ideally located properties on Fourth Street languishing away.

Not a lot has been happening on this stretch of Fourth Street since 4th Street Live opened. An upscale Japanese restaurant has cancelled its plans for City Property Group’s Wright-Taylor Building and a local club once planned for the McCrory’s building has fallen through. With the J.C. Penney building’s location on a pedestrian mall just a block south of Cordish’s development and between the Brown and Seelbach hotels, redevelopment of the property is only a matter of time. Recently, there has been substantial interest in the building even though nothing has materialized. Even last week, a potential deal for the building began discussions, so hopefully we might hear something about the property soon.