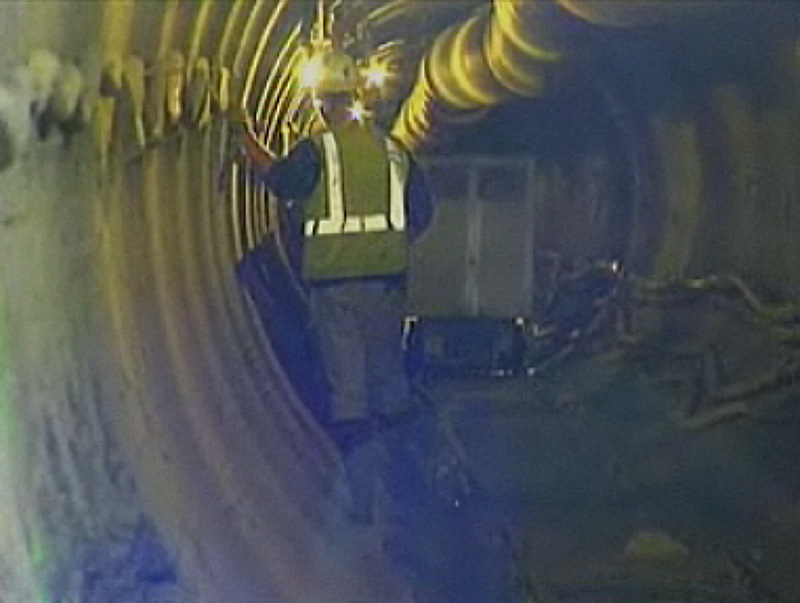 The Louisville Water Company continues work on its Payne Treatment Plant near Prospect including a $50 million tunnel far below the city’s surface. R. David Schooling brought the story to our attention after local media toured the site in mid-October.

The nearly mile-and-a-half long, 12-foot diameter tunnel is carved out of limestone bedrock 200 feet below ground and will serve as a “riverbank infiltration tunnel” that utilizes the natural filtration of water passing through limestone on its way to the aquifer. Water will be captured in wells and piped for drinking via this tunnel.

A train has been set up in the tunnel to transport workers along its length. Crews will soon be lining the tunnel’s limestone walls with concrete to form a smooth underground “pipe.” Work will be complete in 2010.

Schooling tells us the only other operating subway in the state is at the Northern Kentucky Airport: “even though this [the Prospect tunnel] is more of a mining type of operation, in other words a subway of short duration for reasons of construction, it is never-the-less still a subway that Louisville will have had for about 4 years. The only other true high capacity actual operating 24/7 general public subway operates in the lower level of the Northern Ky/Cinn. Airport -International terminal.”