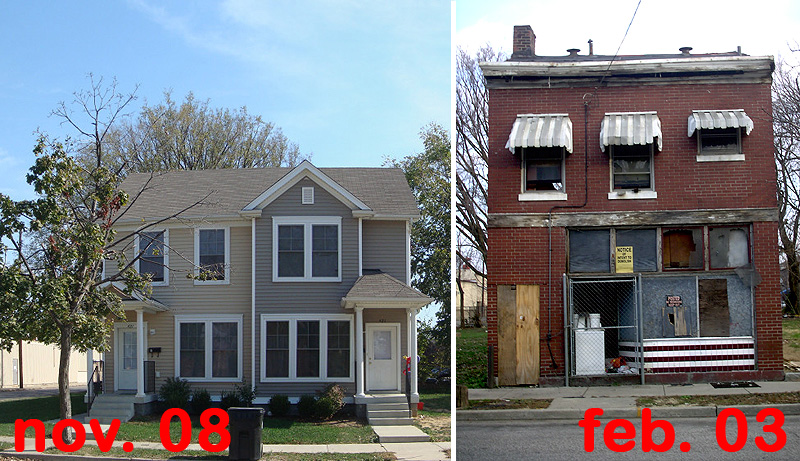 Here’s a new feature we hope to run periodically where we’ll dig into our photo archives to spotlight a part of town that has changed dramatically. The first installment is in the Phoenix Hill neighborhood on Shelby Street between Marshall Street and Muhammad Ali Blvd. Currently, two new construction townhomes occupy this site on the eastern side of the street, but about five and a half years ago, back when the Clarksdale Homes were still standing, the picture was quite different.

An abandoned two-story mixed-use commercial building sat decaying and boarded up. You can see the intent to demolish sign hanging just above the door. The brick structure was quite deteriorated, but if it could have stood just a few more years, the century old structure would have found itself in the middle of a rapidly gentrifying new neighborhood. There was plenty of space to build a set of infill townhomes adjacent to the building.

Directly north of the now-demolished structure was an Operation Brightside community garden cleverly named the “Garden of Eatin,” but when this picture was taken, the place was little more than a grassy field. Another building directly south of this spot has also been demolished and remains an empty lot, but sadly we cannot locate any photos of the corner of Shelby and Ali from that time.