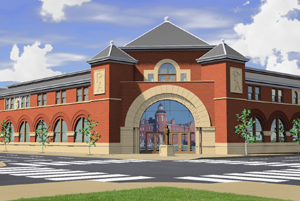 Presentation Academy on the corner of Fourth Street and Breckinridge Street seems finally ready to move forward with plans for a $5 million Arts-Athletics Complex adjacent to their main building. The facility will include a 700-seat gymnasium, 300-seat auditorium, art & dance studios, and offices. The tiny one-story, limestone-clad, art-deco 900 Building was demolished in late July of 2007.

The site was cleared slowly over the next few months and has been sitting as a gravel lot since then. Last week a contractor’s truck, some equipment, and a hefty pile of rebar showed up at the site. Promising for the imminent construction of the new facility? We hope so. An official groundbreaking was held last May 8th.

The new facility is a critical element in a vibrant and exciting future for the school that has more than 8,000 living alumnae. In addition the project is an investment in downtown Louisville, as Presentation considers the entire downtown area to be its campus.

The new building is quite nicely designed to blend with the historic SoBro neighborhood as well as with the current Presentation Campus and represents the first new construction on the 176 year old school’s campus since 1948. The 900 Building’s demolition brought protests from some preservation groups, but the building was in disrepair (much of the limestone facade was chipped) and lacked the urban scale to anchor a prominent intersection. In contrast, the new structure will be similar in height to adjacent buildings, be clad in brick, stone, and precast concrete with carved reliefs and medallions, decorative metal finials on spires, brick arched windows along the sidewalk, and a cornice to match its historic neighbor. In addition, a statue of Catherine Spalding, namesake of Spalding University next door, is planned at the main entrance.