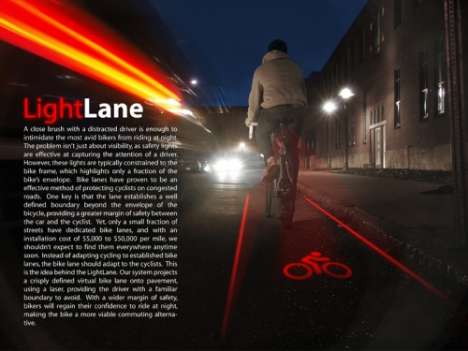 Imagine if there was a bike lane everywhere you wanted to cycle. Instead of spending thousands of dollars building lanes all across the city, designers Alex Tee and Evan Gant of Altitude Inc. have created a laser “Light-Lane” that projects your very own lane on the road beneath your bike. Every cyclist becomes his or her own lane. The idea, according to the design team, is to create a margin of safety that’s readily visible to motorists in an effort to increase bike safety in low-visibility situations.

While the concept behind the design is great and the added visibility should improve safety, we’re still firm believers in permanent and dedicated bike lanes. If the stripe is on the concrete all the time, drivers should eventually learn to respect it, or separating the lane avoids the issue altogether. But, hey, why not use both? Many neighborhood streets are too small for a bike lane, so this gadget would work great. Thanks to our friends at Consuming Louisville for pointing out the story. (via TH Magazine)