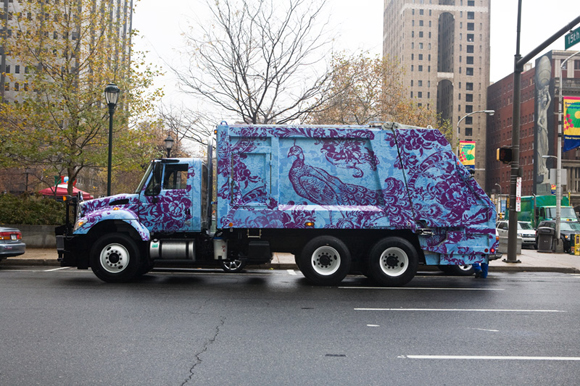 This week’s art car wasn’t found in Louisville. But what if it could be? We’re sure Louisville could come up with something just as creative or weird as these trucks from Philadelphia.

Philly’s Mural Arts Program teamed up with The Design Center at Philadelphia University to cover 10 trucks with these graphics that were inspired by historic textiles from the 19th and early 20th century. The public art display was put in place this year for Earth Day. More photos can be seen over at wejetset and more info on the trucks can be found here.

The Mural Arts Program is a response to graffiti problems in the city. As some are saying graffiti is a growing problem in Louisville, perhaps we could learn a lesson. Here’s more info from their web site:

The Mural Arts Program began in 1984 as a component of the Philadelphia Anti-Graffiti Network, an effort to eradicate the graffiti crisis plaguing the city. The Anti-Graffiti Network hired muralist Jane Golden to reach out to graffiti writers to redirect their energies from destructive graffiti writing to constructive mural painting. Mural-making provided a support structure for these young men and women to develop their artistic skills, empowering them to take an active role in beautifying their communities.