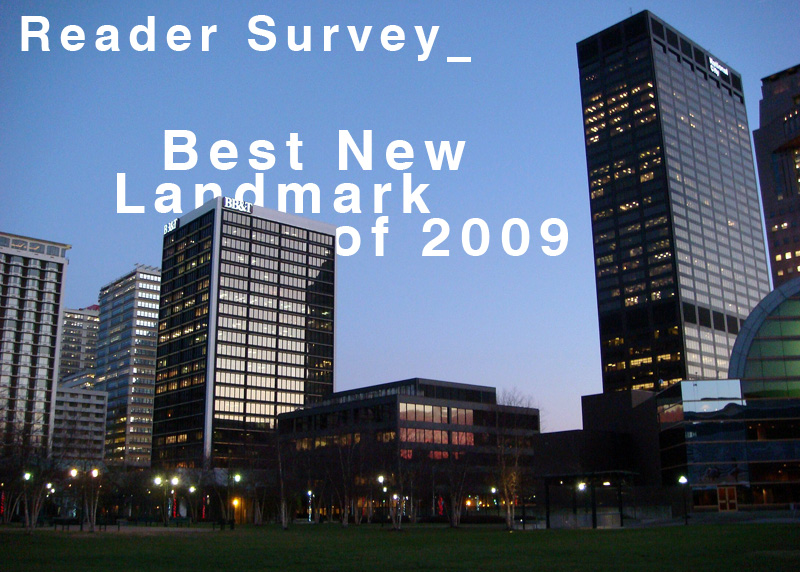 That’s right. We’re taking a reader survey to figure out the best new landmark of 2009. Not only that, but we’ve partnered with local architect Steve Wiser to provide prizes for two lucky survey respondents!

Beginning today, you can nominate your choice for Best New Landmark of 2009 (details below). The contest runs through Wednesday, December 2 at 5:00pm and we’ll announce the winners on Friday, December 4. Two lucky readers will be randomly selected from all entries received (one per person allowed). Prizes include Steve Wiser’s new book Louisville Tapestry: People & Places Who Helped Create America’s Most Livable City and the DVD Louisville Landmarks & Legends.

With the help of Steve Wiser, we’ve compiled a list of twenty new construction projects in Jefferson County and Southern Indiana to help you with the survey process. Most of these projects have appeared on Broken Sidewalk in the past, but there are a few that haven’t. We’re considering any new construction such as buildings or public art that hit the scene in 2009. If you can think of a new landmark that deserves the top prize, please feel free to nominate it in your response. Just remember, the building must Â have been completed in 2009!

To enter, simply send an email to bs@brokensidewalk.com with “Best New Landmark of 2009” in the subject line. Include your name, age, occupation, and neighborhood in the message along with your choice for Best New Landmark of 2009. If you like, qualify your nomination with a short description of why you like the building (some responses may be published anonymously).

Don’t worry, we won’t let anyone have access to your information, it’s completely anonymous. We will name the winners (only using the supplied name) at the end of the contest. Broken Sidewalk has been growing lately and we just want to get to know our readers a little better to create a better site for you.

[ Editor’s Note: Added new user submitted listings to the bottom of the list after the click. Tell us if you know of another new construction project from 2009 that should be on the list. Please remember this is a survey of new construction only. Renovation projects will have their own survey at a later date. ]

Here’s a list of twenty projects completed in 2009. You can choose from this list or nominate another project not listed here. We’re missing a small amount of data on a couple of them (as noted below), so if you can fill us in, send an email to bs@brokensidewalk.com.