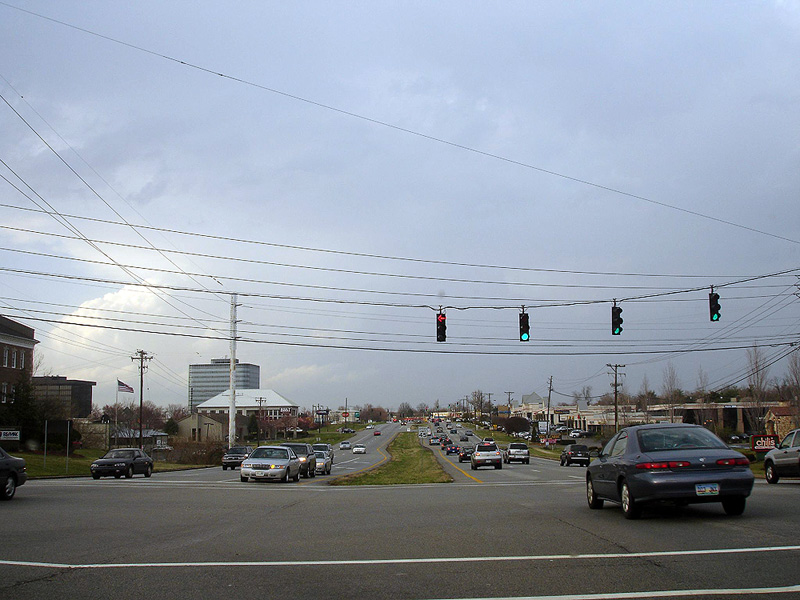 A Louisville man was arrested today for making his 6-year-old daughter walk to school. WHAS 11 reported that the father was charged with endangering the welfare of a minor since the route to her elementary school was on a busy road with no sidewalks. The incident happened on a two-lane suburban street, but it’s the same with all sorts of streets in Louisville and other cities including Hurstbourne Lane pictured above. The girl was apparently walking to school because she missed the bus.

While it may not be the brightest idea to force your 6-year old child to walk down a suburban arterial street during the morning rush hour all alone, the underlying problem is that we have been designing neighborhoods where it’s unsafe for children to walk or play. We’re not defending this individual case, but condemning that children in Louisville literally can’t walk to school in many parts of the city.

The problem exists with the low-density, auto-dominated areas and the rigidly hierarchical road system that reinforces them. With speed limits of 35 or 45 miles per hour, much more than is required to kill a pedestrian, and no stops or obstacles for great stretches, the road is simply going to be unsafe. Many of these roads are just country lanes on steroids with too much traffic from over-development during the last century.

There’s usually no other way to walk from one point to another without using these dangerous roads, either. The subdivisions branching dendritically from the arterial spine don’t connect one place with another. They were designed that way to force all traffic onto designated streets and away from the residential street. More connections must be made to form a true sort of suburban grid, not only to provide safer routes for children and pedestrians, but to ease traffic congestion too (but that’s another topic). There are a number of ways to improve the safety of the street, but throwing down a strip of sidewalk isn’t necessarily going to fix the problem.

Even if there were sidewalks on these poorly designed suburban streets, there’s no guarantee of safety. Two months ago, on a similar street not too far from this incident, a crossing guard was killed by a pickup truck driver while helping a child cross the street right in front of a middle school. No charges were brought against the motorist (read more here). Whether there are sidewalks or not, the streets we have been building in the suburbs are just outright dangerous for children and just about anyone else who tries to walk along them.

The ability to perform basic tasks such as walking to school should be a qualifying factor for neighborhoods. We shouldn’t be praising the suburbs as we know them as a boon for children if they are trapped in their own backyard prison-fortresses until a motor vehicle comes to sweep them away to the outside world.