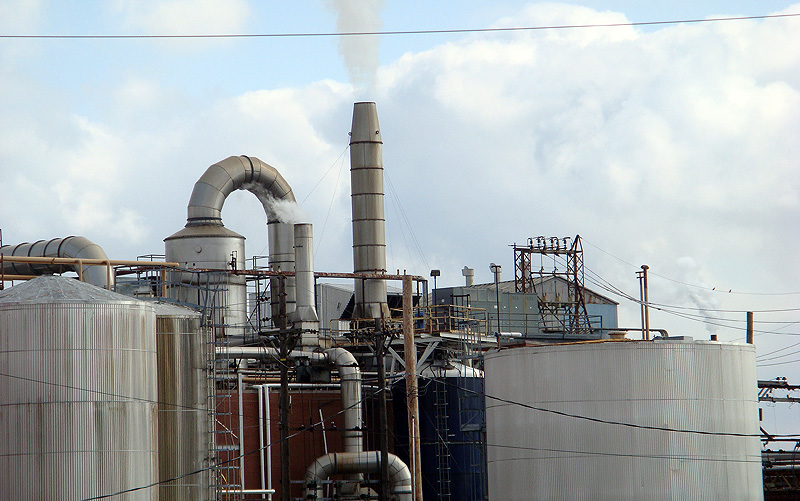 The JB Swift plant between Story & Mellwood Avenues in Butchertown had begun a construction project earlier this year illegally without a permit. The construction site was shut down after the city took notice, and a hearing was eventually set after much wrangling for last night.

We couldn’t make it to the meeting but the Butchertown Blog has a good wrap-up of the events:

At tonight’s JBS Swift’s neighborhood meeting at Hall Cafeteria, both the plant engineer and general managers admitted that “mistakes were made” in the way they went about expanding their facility. They also acknowledged that the structure they are using to unload the live pigs has not been inspected by city officials, which poses potential hazards for their workers who unload between 15,000 to 16,500 pigs per day. Those numbers seemed to exceed the maximum production rate they are allowed at 10,000 per day, but further investigation is required to determine that.

The meeting took place across the street from the Swift plant and reportedly around 50 people showed up. It was arranged as part of a requirement to get Swift’s conditional use permit changed to allow the expansion. According to the C-J, Swift claims this is all a misunderstanding:

Swift plant engineer Keith Strunk and general manager John Cliff said the company mistakenly started work last fall on the animal chute without approval for the modified conditional use permit, thinking the contractor for the work had obtained the necessary approval.

The reaction from the neighborhood was apparently one of skepticism about the company’s interests. According to Fox 41:

Their billboard on Mellwood Avenue says, “Swift, a company with a fresh approach”, but their approach was less than acceptable Tuesday night.

After their meeting with concerned neighbors on Story Avenue, John Cliff, the general manager, Keith Strunk the plant engineer, and Swift attorneys refused comment to about the neighbors concerns.

“They did admit to having made a mistake, but seem to think like everything else, there should be no consequences to those mistakes. What consequences do you think there should be for not going through the permit procedure? The land development code sets forth those consequences and they include revocation of the company’s existing conditional use permit,” said Jonathan Salomon, who is representing neighbors.

The neighborhood questioned whether any sort of aesthetic shielding had been considered to allow the plant to better fit into the neighborhood and Swift said it in fact had not. In the end, though, a decorative facade on the Swift plant would be like putting lipstick on a pig.