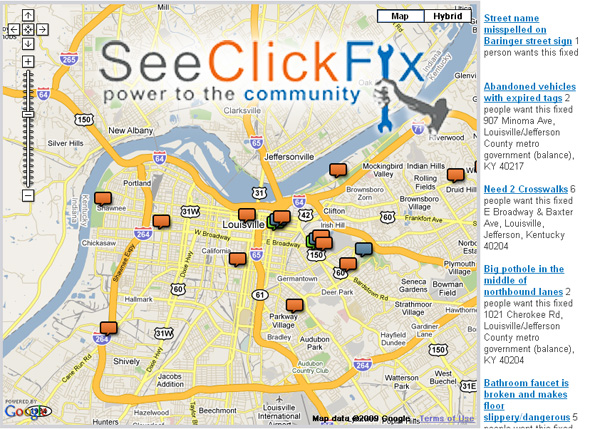 Ever see some problem around the city and want it fixed? Maybe it’s a pothole or a burnt out street light or even a broken sidewalk. There’s a new feature on Broken Sidewalk that allows you to report the non-emergency problems you see around the Louisville Metro area and view the problems others have found as well.

You will notice a new tab at the top of the page to the right of the “Map” tab. Just click See.Click.Fix and a page with a map of Louisville and existing problems will appear. We have partnered with See.Click.Fix to provide this service on the Broken Sidewalk web site and you can add your own problem by double clicking on the spot on the map where you’re problem is located.

You can use this new feature without leaving Broken Sidewalk and hopefully draw attention to some of the small problems around the Louisville area. See.Click.Fix was created by a group in New Haven, CT and has been used by the New York Times, the Boston Tribune, the San Francisco Chronicle, and the New Haven Independent among others.