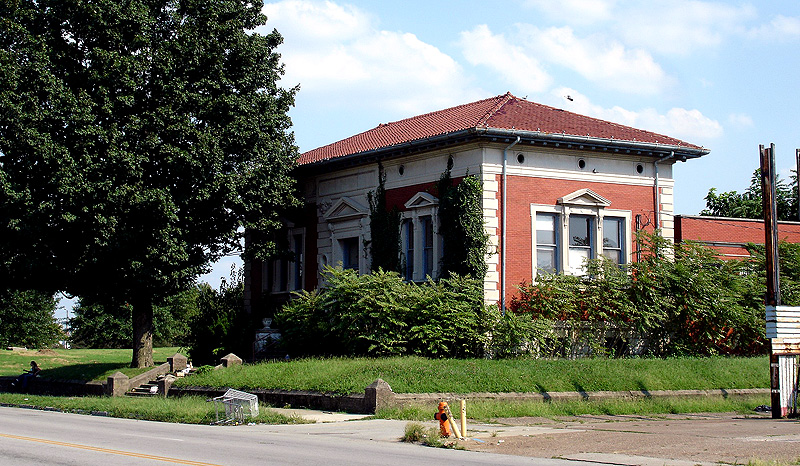 The old Jefferson Branch of the Louisville Free Public Library is one of the original nine Carnegie libraries in Louisville. Built in 1912 and opened in 1913, the building now sits forlorn on one corner of Western Cemetery on Jefferson Street near 17th Street.

Designed by prominent Louisville architect D.X. Murphy, the Jefferson Branch Library is an excellent example of the Beaux-Arts style. The same architects are responsible for such projects as the original Churchill Downs, the Glassworks building, the Jefferson County Jail, and the Kentucky Home Life Tower. A Courier-Journal article dated February 29, 1912 noted the structure is “one of the most attractive buildings of its type in the city.” The total cost of the building at the time was just under $23,000. The branch closed in 1975, fell into disrepair, was converted into an office building, and is now in early stages of disrepair once again.

We have learned that the building is now in the process of being publicly auctioned at a Commissioner’s Sale after foreclosure (see document here, Warning: .DOC). Senator Gerald Neal, who was once involved with the structure when it was an office building, noted that this is a good situation for the building as it will clear the title for future redevelopment. Senator Neal said he has heard of interest in the structure and believes the building has a “nice future” with its best days ahead. The public auction will occur at 10:00 on Tuesday, July 21, 2009 at the Old Jail Building Downtown on Liberty Street. The Jefferson Branch Library was added to the National Register of Historic Places in 1979.

Western Cemetery, also known as Pioneer Cemetery, is one of the city’s oldest yet most neglected. It was built at a time when cemeteries served as not only monuments to the past, but also recreation grounds for the living. Check out this photo of an impromptu baseball game at the cemetery. Note the majestic Ouerbacker House in the background (that’s supposed to be renovated soon) and the row of stately townhouses on the left hand side that have been long demolished. Here’s a map of the area before the library was built showing many structures now gone. In 1912, broken grave markers were cleared from the cemetery in a clean-up effort. For a list of known burials in the cemetery, check here.

Louisville’s first cemetery was on the site of modern-day Baxter Square, now surrounded by the Beecher Terrace housing projects. When the cemetery reached capacity, Western Cemetery was created and opened in 1830. The layout of the cemetery was segregated (view a map below). Roman Catholics maintained their own section far removed from the “African” section while other portions were dedicated to the general public, strangers, and to private reservations. The Jefferson Branch Library was built on a portion of the cemetery dedicated to “African” graves.

[Images of the grave maker / map in Western Cemetery via w.marsh on flickr used under Creative Commons Attribution 2.0 License.]