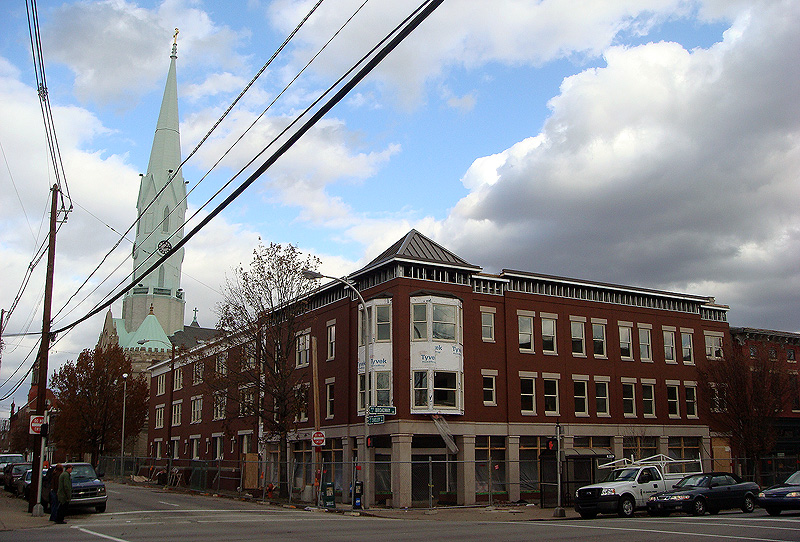 The Shelby Street Apartments on the corner of Shelby and East Broadway was one of three projects recently declared a New Landmark by the Louisville Historical League. The League issues a New Landmark Award when it determines a building fits contextually with its neighborhood. In this case, the three-story, red brick building blends into the streetscape of Phoenix Hill matching materials, style, and height with surrounding structures.

“The facade detailing and composition greatly strengthens this commercial block, and significantly improves the revitalization of the East Broadway district,” said Steve Wiser, a league board member. Any time a vacant corner lot is infilled with a new project, the street environment completely changes. The addition of one key building can suddenly make the street feel whole, or at least significantly more than it did prior. And regular readers should know how much we love the East Broadway “Bridge” Corridor. This project only helps to strengthen the area.

The project will open later this year with 22 one- and two-bedroom apartments over 3,500 square feet of street retail. The building was funded with federal funds from the nearby Liberty Green development and will offer mixed-income units ranging from subsidised to market-rate. This has been shown in many cases to stabilize neighborhoods once replete with single-income subsidised housing. The new building is by no means a “project.”

We like how this building is set apart from the rest of Liberty Green and hope the scattering of units across abandoned parcels in the community can help solve many of Louisville’s problems. We appreciate the mix of public and private development going on at the main Liberty Green site, but would like to see that expanded in future Hope VI redevelopment projects. With the funds available to rebuild housing, strategic mixed-income infill across many neighborhoods will create a more authentic urban environment for everyone.

It’s good to see the project receive the recognition it deserves for such an impressive infill development. Leasing the apartments shouldn’t be too much of a problem, but we hope they can find some retail that can fill the corner site.

The Shelby Street Apartments were designed by Phoenix Hill architecture firm Kersey & Kersey. The other two projects to receive New Landmark designation were the Fleur-de-Lis on Main and the Shippingport Bridge at the McAlpine Locks. The Louisville Historical League has been awarding New Landmarks designations since 2005.