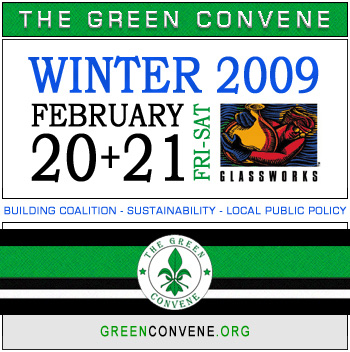 In just a few weeks, the Glassworks building should be teeming with ideas about how to “green” Louisville’s public policy. The inaugural Green Convene, set for February 20th and 21st, hopes to unite a coalition interested in affecting real change in local policy and government. A second event is scheduled for July to coincide with the Forecastle Festival. Registration for the event is $10 and can be done online at the Green Convene web site, but only 250 seats are available, so act fast to get your ticket.

The two day event will feature prominent local leaders including Charles Cash, Director of Metro Planning & Design Services, Jack Trawick, Executive Director of the Center for Neighborhoods, and Metro Council Members Tandy, Owens, and Ward-Pugh. With such a strong guest list, the ideas espoused at the event are sure to have an important impact on Louisville.