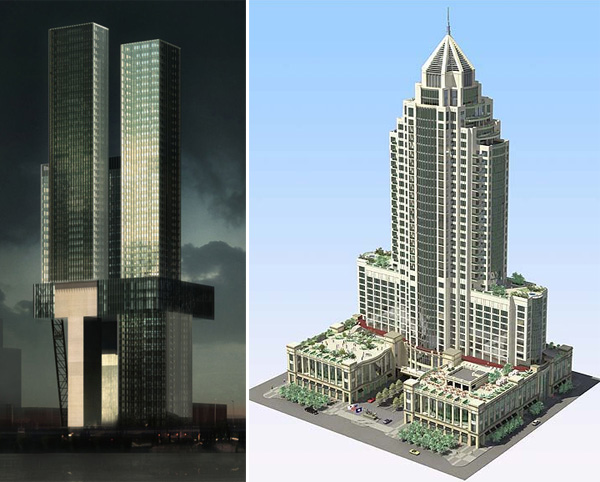 With site work about done and actual construction expected to begin next month on the CentrePointe tower in Lexington, could it mean the end for Louisville’s long held title as the city with Kentucky’s tallest building? Lexington’s $250 million, 35-story tower will face competition only from the Aegon Center in Louisville, and while it’s scheduled to top out at about 445 feet tall, about 100 feet below the top of Aegon’s dome, developers are including an antenna of undisclosed height atop the tower that may take the title on a technicality. We’re also unsure if the 60-some foot spire is included in the overall height, but it probably is.

The CentrePointe project will be racking up a number of other titles, though. It’s slated to be LEED certified, making it Kentucky largest/tallest LEED building and will house Kentucky’s highest residence, a panoramic penthouse on the top floors. It also managed to grab the most destructive title, knocking down the most historic buildings in recent memory (14) for a mega-development. The best Museum Plaza could do was 4, and we still have facades standing. Center City and the Iron Quarter are looking like contenders, but even they will fall short. Sadly, it will garner yet another title: first mega-project to feature a jumbotron (though our arena will likely be finished before the CP, score one for us).

Museum Plaza could change all of this, though. We figure the main mistake with Louisville’s poster-child-development was that it should have followed the financing methods of CentrePointe: find filthy-rich, unnamed foreign investors to put up cash for the project (they’ve got a 30-year TIF, too). While the Aegon Center’s dome will likely inch taller than the finished CentrePointe, its becoming clear that if Louisville wants to retain the coveted tallest title, we’re going to have to act fast. CentrePointe will contain retail and restaurants, offices, luxury condos, an entertainment venue and a J.W. Marriott hotel. The target opening date is in 2010 for the FEI World Equestrian Games.