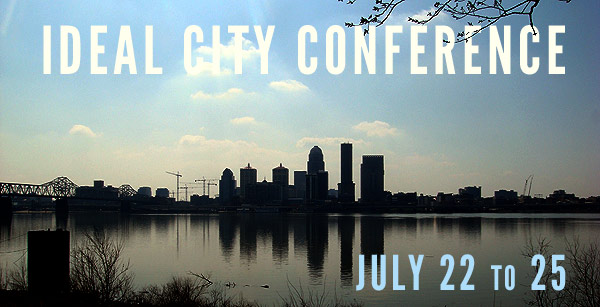 The University of Louisville’s School of Urban & Public Affairs is hosting the Ideal City Conference beginning tomorrow, July 22 and running through the weekend – and you’re invited. Beginning each day at 8:30 a.m., Professor John Gilderbloom has arranged for an international panel to tackle the challenges facing cities today and into the future.

While the conference isn’t free, if you mention Broken Sidewalk at registration, you can get a discounted rate of $99 for the entire conference (that’s down from $350!). The entire schedule is posted after the click, but some of the featured speakers include Bill Weyland, Steve Wiser, Tom Owen, and many other local and national notables.

The topics cover cities in general and many use Louisville as a prime example covering issues such as sustainability, equitable development, urban landscape and biodiversity, urban design, and many more. This sounds like an excellent opportunity to catch up with some leading urban thinkers to discuss the future of Louisville and the American city.

Upon Registration, Parking Passes will be available for attendees on Thursday and Friday in the Gravel Parking Lot behind the School of Urban and Public Affairs Building. We will also provide tickets for Comedy Caravan Program. Parking on Saturday and Sunday is open behind the building, no pass necessary.