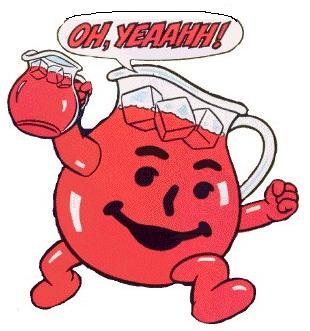 A tipster wrote in this morning to report about some breaking news on Alta Vista Road off Lexington Road and now we need your help to verify the destruction. Apparently, the Kool Aid guy has had a little trouble with a brick wall.

The Presbyterian Seminary on Alta Vista has a brick screen wall along the road. A rather large portion of the wall has fallen or been knocked down. It has been like that for a month or two with yellow caution tape around it. This morning I noticed that someone has positioned a large, seemingly hand-made, stuffed Kool-Aid guy atop the broken portion of wall with a big sign that says “Oh Yeah!”

Now I hope it’s obvious a photo is required to illustrate this event. Anyone going to be in the area today? Send in a photo and I’ll post it here. It doesn’t have to be fancy, a cell phone pic will do. Send your photos, reports of other Kool Aid guy sightings, or anything else interesting to tips@brokensidewalk.com. This must be preserved for posterity.