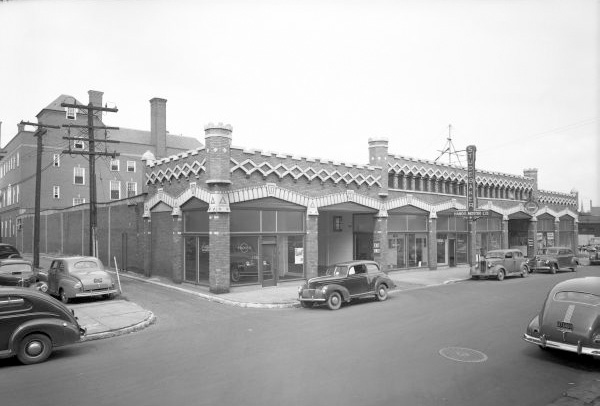 A nondescript building at 217 Guthrie Street between Second and Third Streets was once a castellated Studebaker dealership. Up above is a view from 1947 where you can see the detailed brickwork of the building. At some point, the original facade was removed or covered up and replaced with the ugliness that’s there today.

I wonder if there’s anything of the original structure underneath the metal top half, but I would guess it was destroyed long ago. The back portion of the building still exists and is used for parking. It may not be all that grand, but it sure had character.

Louisville once had many Studebaker buildings across town. The Warren-Proctor dealership building is still on Shelby Street and Shelby Parkway (and here’s a view of the building in the early 1960s). Another building on Floyd Street between Caldwell Street and Ardella Court bears the name Studebaker surrounded by a wheel in terra cotta. It’s now the Paul Davis Restoration company. Anyone know of any others?