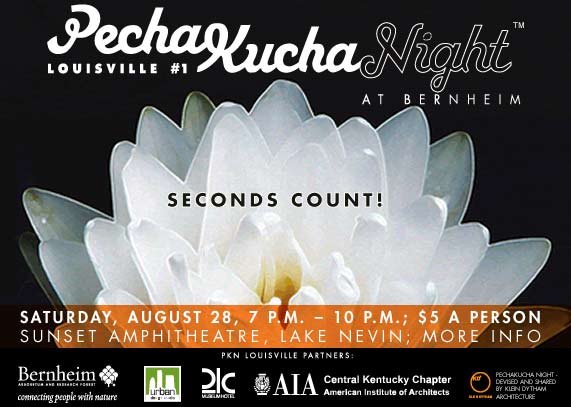 The first official Pecha Kucha Night Louisville is planned for Saturday, August 28 at Bernheim Arboretum. A partnership including the Urban Design Studio, the Central Kentucky Chapter of the AIA, Bernheim Arboretum, and the 21c Museum Hotel brought Pecha Kucha (pronounced peh-chak-cha; or just watch the video after the jump) to Louisville and is hosting the inaugural event with 14 presentations.

This is really exciting news that Louisville is finally on the PKN circuit and I encourage everyone to go listen to some great speakers this Saturday.

Pecha Kucha is a rapid-fire presentation format where presentations consist of 20 slides or images each lasting 20 seconds. The concept debuted in Tokyo in 2003 as a way to keep presentations short and to the point. Astrid Klein and Mark Dytham of Klein Dytham architecture invented Pecha Kucha and still organize events in Tokyo. Here’s more from the UDS:

The basic premise of the event is simple, individual presentations that consist of 20 images that last 20 seconds per image. This makes for a concise presentation and keeps the pace moving. It allows for a number of people to present their work, interests, ideas in a casual setting. Many of the events take place in bars, nightclubs and other venues that promote a relaxed atmosphere.

Louisville’s first Pecha Kucha Night begins at 7:00p at the Sunset Amphitheatre on Lake Nevin at Bernheim. Fourteen speakers will talk about a variety of topics. Live music, beer, and an art exhibit will accompany the presentations. You can see the list of speakers at the PKN Louisville site.

Bernheim Arboretum is located about 25 miles south of Louisville off Interstate 65 mile marker 112. Turn left at the exit onto St. Rt. 245 and continue about a mile until you see the Bernheim entrance on the right. Unfortunately, the event is really only accessible by car, but event organizers encourage car-pooling.