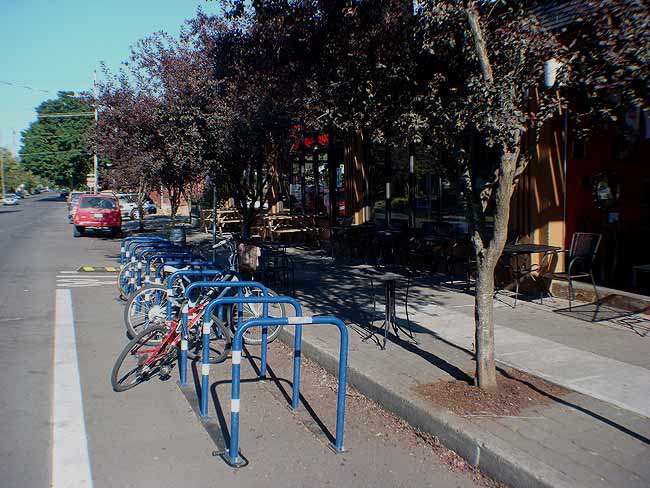 Portland, Oregon is widely recognized as one of the most bike-friendly cities in the world, and one major part of what gives them that title is an abundance of bike parking infrastructure. Anywhere you go in the city, there seems to always be some convenient place to lock up your bike whether it’s at a simple staple lock on the sidewalk or at a the now-ubiquitous on-street bike corrals.

It’s not enough to simply provide great bike lanes or paint sharrows. At the end of your ride, you’re going to need to put your bike somewhere, and Portland makes that task easier than probably any other American city.

Here in New York, like many cities, I have found bike parking woefully inadequate and most days find myself walking up to a block to find a sign post to lock my bike to. Simply providing lots of inexpensive bike parking is the obvious solution.

There are many different types of bike parking found around Portland. Most often, a staple rack, named for their uncanny resemblance to its office supply counterpart, dot the sidewalks, not only in commercial districts, but also in neighborhoods and adjacent to bus stops and parks.

Two of the most exciting typologies are the on-street bike corral and the sidewalk bike oasis. In the past few years, bike corrals have become quite popular and have begun appearing in cities across the country. Older bike corrals in Portland are completely surrounded by a reflective speed bump and set apart by plastic bollards to signal to motorists that the space is dedicated to bike parking.

Now that the feature has caught on, newer bike corrals are only marked by white a white box and a curb at each side to stop a parallel parking car from driving into the bikes. Both feature a small space for presumably getting on and off your bike—although on more than oneÂ occasionÂ this open space was occupied by a scooter.

Businesses who front the bike corrals are tasked with maintaining the ground around them, removing organic detritus or snow when necessary as city equipment cannot access the area around the racks. Most often, these bike corrals were well used and according to a StreetFilms video about them below, business owners appreciate the increased parking in front of their shops. (Portland counts number of “vehicle” parking spaces, not the number of “car” parking spaces.)

Similar to a bike corral, a bike oasis is actually situated on the sidewalk and is sheltered by a roof canopy keeping bikes and cyclists dry. The one in the photo above also incorporates a bike map showing bike lanes, routes, and trails. These bike oases are built on sidewalk bumpouts on corners so as to not crowd pedestrians. While more expensive (it involves rebuilding the sidewalk and building a canopy), a bike oasis does not disrupt street cleaning or snow removal as trucks can simply follow the new curb line.

What’s also amazing about bike parking in Portland is the creativity of the private sector in supplying bike racks. The example above is a bike rack at an office building. The name of the business inside is “Anvil” and the shape of their bike rack is, of course, an anvil. Bike infrastructure doubling as artful corporate branding.

Up above is a large, covered bike parking area at the entrance to a supermarket in a dense commercial corridor. As you can see, it’s well used proving that many Portlanders opt to go grocery shopping by bike. Also interesting, the butterfly-roof design of the canopy drains into an adjacent rain garden.

Below is a Streetfilms video about bike parking in Portland and a gallery of more bike parking options from the mundane to the unique.