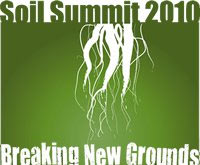 Urban farming is really starting to take root. Check out the Soil Summit 2010 planned for August 14. It’s free but a $20 donation is suggested.

This also reminds me of an interesting segment I heard recently on WNYC’s Leonard Lopate Show featuring author and urban farmer Manny Howard. He was discussing his backyard farm (not too far from where I live in Brooklyn) and the challenges he experienced when trying to subsist only on what he grew for a month. He wrote a book about the experience called My Empire of Dirt.

One issue discussed was backyard soil contamination due to a variety of issues including lead-based house paint that found its way into the soil. It can potentially create a toxic backyard setting and require new soil to be brought in for farming. Anyway, here’s some info about the Soil Summit 2010:

Get the dirt on your soil and learn about soil-related issues as you begin growing food in your yard and neighborhood. Recently named one of Time’s 100 Most Influential People, urban farming pioneer Will Allen of Growing Power will join the summit via video conference to present and answer questions along with Gary Heine of Louisville’s community gardening organization 15Thousand Farmers and a panel of experts.

The 2010 Soil Summit will be held at the NIA Center on West Broadway on August 14 from 8:30AM – 1PM. Join us to learn simple, easy-to-understand steps you can take to understand your soil fertility and safety.