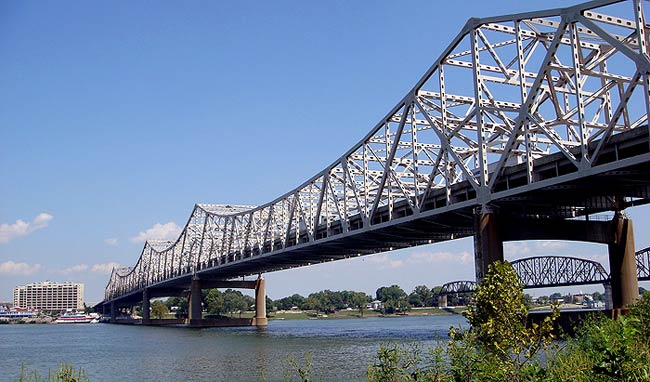 After a recent inspection, the Kennedy Bridge was again rated as “structurally deficient,” a title it’s held for several years. Sounds bad, right? In reality, the term is a technical one used by transportation engineers and can be a little misleading.

First for a little background on the inspection process that leads to a structurally deficient rating. According to the American Institute of Steel Construction:

Bridges are rated on a scale of 0 to 100, where 0 represents the worst case scenario (when there’s really something to worry about). The scale essentially determines what bridges are eligible for Federal replacement or repair funding, and a bridge must score at 40 or below to be of major concern.

The recent Kennedy Bridge inspection ranked the bridge at 75 out of 100. That’s up from a 73 rating in 2006. (Of greater concern, really is the Clark Memorial / Second Street Bridge which has a 53 rating and will bear the brunt of traffic growth if tolls are implemented.)

So it seemed strange when Downtown Development Corporation board member Paul Thompson wrote a C-J Letter to the Editor this weekend appealing to poor connotations of structural deficiency:

The recent article about the annual inspection of the Kennedy Bridge is a wakeup call. “Structurally deficient” and “hollow spots” are not terms I want to hear in relation to a bridge that carries some 130,000 vehicles a day in my hometown… We need the bridges project, the entire project, to move forward with both bridges—East End and downtown—and the reconstruction of Spaghetti Junction.

The annual inspection of the Kennedy Bridge did show that there’s maintenance to be done, but what piece of infrastructure doesn’t need maintenance? According to a C-J article on the inspection (emphasis added):

“Not much changed from last year.” said Josh Rogers, the Kentucky Transportation Cabinet’s project manager for Ohio River Bridge Inspections. He added that hollow spots—found by tapping on the bridge’s concrete deck—will be referred to consultants for further investigation when they conduct a more formal inspection in December. Eventually, the areas that sound hollow are likely to become potholes, Rogers said.

The bridge was rated as structurally deficient because of roadway cracks, joint seals that were failing and small cracks in its concrete piers—a rating carried by thousands of bridges across the country.

So we’re essentially talking about repaving or eventual deck replacement. Sounds like standard fare for bridge maintenance to me. But watch out for possible billboards this fall touting that “structural deficiency” as something more than what it actually is.

A group called LIUNA, the Laborer’s International Union of North America, is planning to place billboards across Kentucky announcing to motorists that the bridge they will be driving on is “structurally deficient.” (PDF release here.) At stake for LIUNA are construction jobs created from maintaining infrastructure, but pandering to fears of average citizens seems irresponsible.

As a former board member of the Friends of the Waterfront, surely Thompson can’t believe that building the entire Ohio River Bridges Project calling for a massive Spaghetti Junction and a vastly wider highway over Waterfront park is a good thing for Downtown livability.