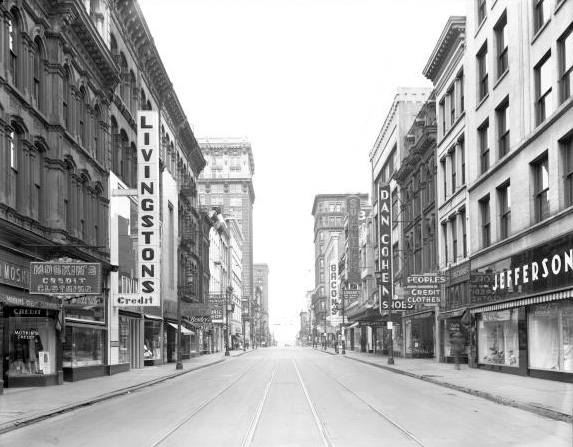 Fourth Street north of Jefferson was once a vibrant and architecturally stunning part of Louisville. The corridor has always been an important spine for the city and is celebrated in our history and culture. Dozens of postcards bear this view, seen above in 1946, and many more highlight individual landmarks lining the street.

A street with this much history and quality architecture must be valued by its community one would imagine. But how did Louisville deal with the scene above? Louisville tore down every building seen in the photograph above, for as far as the eye can see. Every last structure has been destroyed.

So above is what Fourth Street looks like today after a half century of failed urban policy and destructive urban renewal. Immediately obvious is the narrow width of the street and street trees. But beyond, it becomes apparent that every building is new. Nothing historic is in sight.

That’s not to say that every new building is bad, though. Some of these buildings are good and some of them are bad (most of them are obscured by the trees). I don’t think anyone, for example, would argue that the Aegon Plaza tower isn’t a beneficial addition to the city. What can be condemned, however, is the attitude that provided for the wholesale clearance of block upon block of quality urban fabric.

As I mentioned above, many postcards through Louisville’s history show scenes along Fourth Street. Most often, a community prints scenes on postcards that it’s proud of. A postcard announces what’s best about a city or place. At one point in Louisville’s past, the city knew it was really something and it wasn’t afraid to say so.

But then notice the map below. Everything shaded in red has been destroyed or rebuilt since World War II. You can see that these several blocks in the core of the city only contain a handful of historic structures and none survived directly on Fourth Street.

Like I said before, this isn’t to say we should have kept the city a museum and never built anything new. Really, though, was it necessary to tear down everything?

As part of National Preservation Month, I will be highlighting the plight of several buildings around Louisville that were torn down in the past including several along this stretch of Fourth Street. I’ll also show a few examples where demolition did not happen to show how the city has changed while remaining the same.

But can you imagine if we still had Fourth Street?