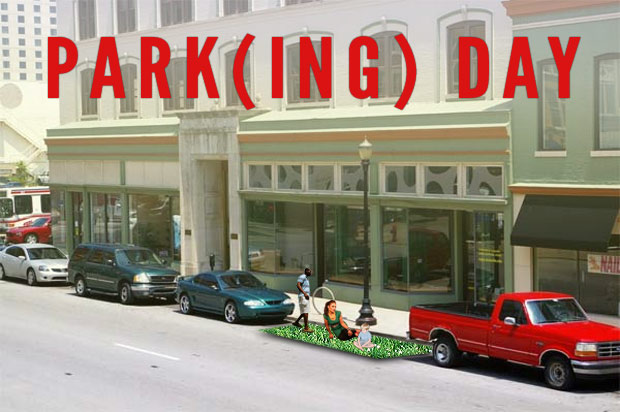 Today is Park(ing) Day for the first time ever in Louisville and you can go celebrate all day long in front of the Urban Design Studio at 507 South Third Street. What is Park(ing) Day you ask?

PARK(ing) Day is a annual open-source global event where citizens, artists and activists collaborate to temporarily transform metered parking spaces into PARK(ing) spaces: temporary public places. The project began in 2005 when Rebar, a San Francisco art and design studio, converted a single metered parking space into a temporary public park in downtown San Francisco. Since 2005, PARK(ing) Day has evolved into a global movement, with organizations and individuals (operating independently of Rebar but following an established set of guidelines) creating new forms of temporary public space in urban contexts around the world.

The mission of PARK(ing) Day is to call attention to the need for more urban open space, to generate critical debate around how public space is created and allocated, and to improve the quality of urban human habitat—at least until the meter runs out!

Basically, Park(ing) Day means taking a parking spot and transforming it into a park.

I have been trying to organize one of these events for several years, but now the Urban Design Studio has made it a reality (and it’s the only official one registered in Kentucky). Be sure to stop by the Urban Design Studio sometime today to check out the festivities, relax on the real grass park reclaimed from city streets, and draw a picture about Louisville that we’ll post on Broken Sidewalk! Thanks UDS.

Louisville has one mini-park this year, but just wait until next year. I think there’s going to be an explosion of Park(ing) Day festivities! I’ll post some photos of the Louisville spot later today.