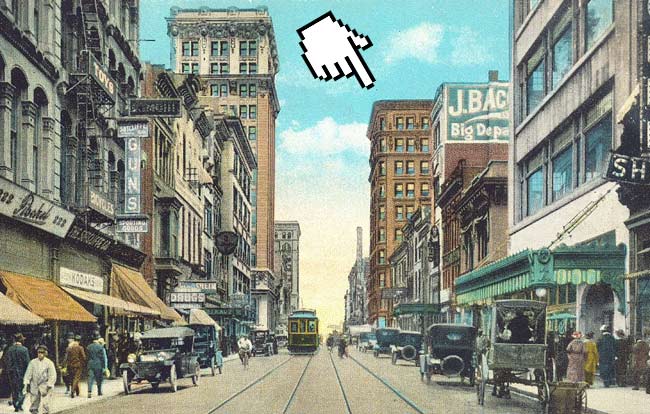 Here’s another in our Lost Louisville series where we showcase a great historic building that was demolished in the city. This is the Todd Building on the corner of Fourth and Market Streets, one of Louisville’s early skyscrapers dating to 1902. The Todd Building sits in that area I wrote about before where every single historic structure was demolished. Like so many other great Louisville Landmarks, this site is now the home of a state-owned parking garage.

Built in 1902, the Todd Building was also known as the Belleview Building and the Equitable Building. The ten-story stone building soared over 128 feet into the air, and along with its neighboring Lincoln Bank Building, formed a towering gateway on Fourth Street (more on the Lincoln Bank Building in a later post).

According to the Encyclopedia of Louisville, the steel-framed structure was named for banker and business man James Ross Todd. It was designed in the Chicago-style by powerhouse architects Arthur Loomis and Charles Julian Clark who designed dozens of other Louisville landmarks.

Like many historic structures, the Todd Building paid extra attention to the materiality at the sidewalk level. It was clad in granite on the first two floors and featured yellow brick above that. Austere ornamentation in sandstone and terra cotta surrounded windows and adorned the top floors.

While the structure was once one of Louisville’s most esteemed addresses, occupancy dwindled after the Depression and World War II. In a short-sighted move, the Todd Building was destroyed in 1983 to make way for a parking garage that can’t quite keep up architecturally. Anyone have memories of the Todd Building they can share?