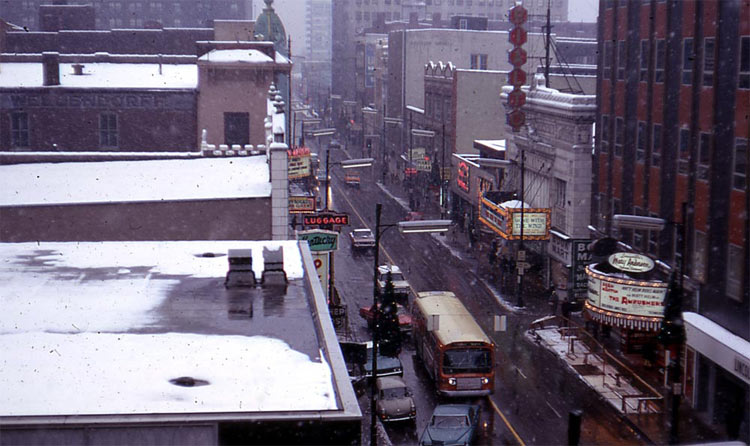 The Transit Authority of River City posted a great collection of vintage buses to their Flickr page detailing the evolution of Louisville’s bus system over the past half century. From the fleur-de-lis patterned “Downtowner” circulator to the bright-red TARC Larc mini-bus, there have been some great retro designs over the years.

Equally interesting  are the backdrops to the photos showing scenes of Louisville that have substantially changed or completely vanished. Above, for instance, the Palace is visible along with the Wright-Taylor building and WFPL headquarters, but the grand Rialto Theater, the Berkeley Apartments, and the Commonwealth Tower have long been destroyed. On the right hand side, the Chestnut Centre still exists in its modern beige color scheme, but its Mary Anderson Theater is no more. This photo was taken from the top of the parking garage at Fourth and Chestnut streets circa 1964.

Above, the old Union Bus Depot sits on the block now occupied by a Marriott hotel, spanning the block between Jefferson and Liberty streets between Second and Third streets. While the building isn’t fancy, does this count as an early example of intermodal transportation facility in Louisville? According to TARC, the depot served the Blue Motor Coach Lines, Kentucky Bus Lines, and Trailways among others. In the background, you can see the now-destroyed Savoy Theater that by this point had fallen from its heyday.

Here is a Blue Motor Coach bus serving suburban Louisville in the parking lot of the Union Bus Depot. According to TARC: “Their five routes ran ‘express’ within Louisville city limits (no local passengers) and stopped on signal at any other location outside of city limits. Blue Motor operated in and out of the Union Bus Depot on Liberty Street at 2nd Street. Their routes served Jeffersontown, Fern Creek, Camp Taylor, Poplar Level Road and St. Regis Park.”

Interestingly, the sprawling city of the 20th century was a boon to the Blue Motor Coach Lines as ridership in the suburbs spiked along their routes in the 1960s and 1970s. This model of bus made by GM featured a more modern look and blue line purchased ten of them beginning in 1964. All of the buildings in the background have been destroyed.

This is certainly one of the strangest buses that must have wandered the streets of Louisville. Here’s some background from TARC: “Flxette #2 was one of 18 minibuses purchased by TARC and actually were the first new buses introduced by the new transit system. These buses were used to introduce the 4th Street and Medical Center circulator routes as well as the Bashford Manor-Oxmoor Circulator. Not very well liked by bus operators, these things did not hold up very well in heavy-duty transit service.” In the background, you can see the Kentucky Tower and a now-gone Ollie’s Trolley food stand.

The Downtowner was the predecessor to those trolley-bus circulators we have now. The service operated on a loop on Fourth Street between Market Street and Broadway with a bus arriving every ten minutes. The service cost ten cents per ride.

A yellow-and-green bus travels east on Chestnut Street with the Caperton Block, still planned for redevelopment, in the background. The Caperton Annex behind it on Chestnut was later destroyed in a fire. From TARC: “Bus 765 is one of 50 buses purchased new by Louisville Railway Company in 1948 primarily to replace older, pre-war buses. These were model TDH4507 (Transit Diesel Hydraulic 45 passenger model 7). The buses were 35 feet long and 96 inches wide, a standard at that time. These buses continued to operate in daily service up until 1974 when TARC purchased its first new buses.”

From TARC: “Bridge Transit Company was the six-bus outfit that operated transit service between downtown Louisville and both Jeffersonville and Clarksville. From their garage on Court Street in Jeffersonville, they also operated a thriving small truck rental business. This is the Jeffersonville bus, shown here heading north on 4th Street at their stop between Guthrie Street and Walnut Street.”

From Tarc: “Bus 810 was part of the first group of new buses purchased in 1961 by Louisville Transit Company in over eight years. The new design from General Motors Truck & Coach featured 53 seats and optional air conditioning, which Louisville Transit deemed to be justified in the local summer climate. These buses also introduced a different (not new) orange and beige color scheme unfamiliar in Louisville, but identical to buses owned by the same company in Milwaukee and Indianapolis.”

Be sure to check out the rest of the buses on the TARC Flickr page.