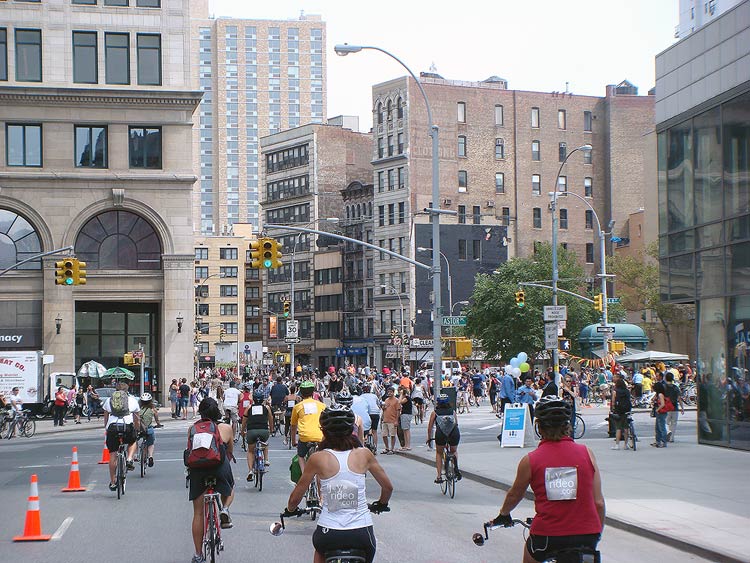 Fresh on the heels of an inspiring talk last week with Gil Peñelosa, director of the non-profit 8-80 Cities advocating for livable cities designed for all citizens, the Urban Design Studio is ready to make concepts reality with a forum tomorrow, Friday, March 23. One of the biggest concepts Peñelosa brought to Louisville is the pilot project: the idea that it’s okay to experiment with the urban environment to figure out what works and what doesn’t. Cities we hold up as examples of urban innovation today have been doing just this for years now, from New York City to Portland, Oregon.

Long before most American cities were making advances in livability, Penelosa was responsible for one of the concepts that revolutionized what it means to inhabit a city: Open Streets. Ever since the automobile gained prominence in the 20th century, we have slowly been turning the biggest portion of our public realm–the streets–away from public use. The Open Streets idea identifies a corridor where removing cars from for a single day, typically on Sundays to avoid congestion, can make a meaningful impact on improving city life. This allows pedestrians and cyclists to fully and safely enjoy the public space that’s all around them but rarely utilized to its full potential. And the results have been stunning.

I have personally taken part in Open Streets programs in Manhattan and Portland (previously discussed here). New York’s program is well developed with climbing walls, sand castle builders, organized bike tours, dance and yoga studios, and even dumpster swimming pools in the middle of Park Avenue. In Portland, the route wound through neighborhoods with food vendors (many hawking goods from the back of bike trailers) and festivities taking place at parks connected by the route. In both cases, the pace of urban life was humanized to the point of a continuous unorganized parade where the citizens were the center of attention.

In Penelosa’s native Bogotá, the concept is called Ciclovia, but in the United States, the name ranges from Summer Streets in New York to Sunday Parkways in Portland to CicLAvia in Los Angeles. We’re going with the working title CicLOUvia for Louisville’s version of Open Streets.  But did you know that Kentucky already holds the distinction of hosting the only state-wide Open Streets program called Second Sundays? Reportedly over 100 counties have participated on the second Sunday in October, but to date, Lexington is the only major player in the game. Louisville is again forced to play catch up.

But how do we make this a reality? Patrick Piuma, director at the Urban Design Studio hopes a new series called BaSIC (Building a Sustainable, Innovative Community) will help come up with answers. “It’s new to me. Ever since we started the Sustainable City Series, I wanted to create something that provides action,” he said. “This is the next step in the process.” Piuma believes 2012 could be the year of Louisville’s first Open Streets program.

This Friday, the Urban Design Studio will be embracing Penelosa’s mantra of Ready, Fire, Aim (as opposed to the paralyzing trend of Ready, Aim, Aim, Aim in which studies and endless talk prohibit any real change) by figuring out how Open Streets can become a reality in Louisville. It’s the first in a planned monthly series that will focus on these livability issues. “We’re making a road map,” Piuma said. “We’ll have an agenda of topics to hit on and figure out what objectives we need to meet.”

If you’d like to see Open Streets in Louisville, head on over to the Urban Design Studio at 507 South Third Street on Third Street on Friday morning, March 23 at 7:30 a.m. (plenty of time to affect a little change before the workday starts!) for a Heine Bros. coffee-fueled forum. You’ve heard of a think tank, but imagine this as a “do” tank, with emphasis on doing. Piuma has asked interested parties to review the online Open Streets Best Practices Guide to be ready to move beyond talk to implementation with an October 2012 date a real potential reality. Here are a few videos to get you started: