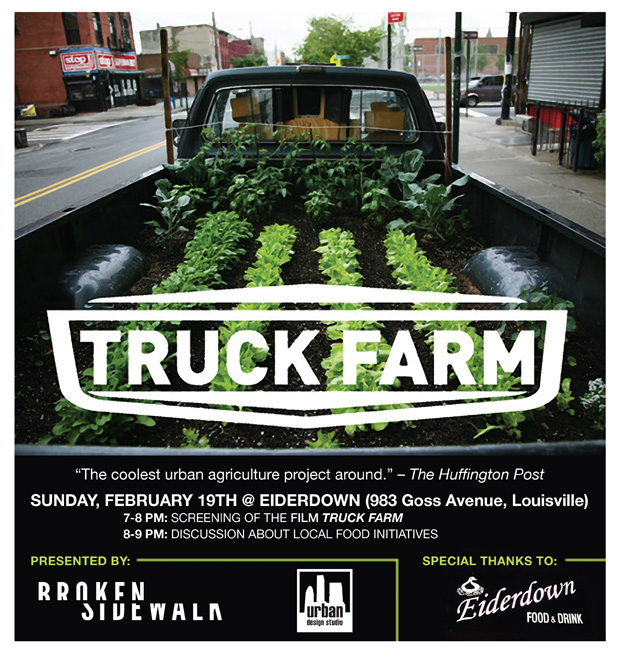 I had the lucky accident of stumbling across the premiere for the film Truck Farm in an abandoned lot in Red Hook Brooklyn last Fall and immediately wanted to bring the movie back to Louisville for a screening. That’s finally going to happen this Sunday at 7:00 p.m. at Eiderdown on Goss Avenue in Germantown. The event is free and food and drink will be available from the amazing Eiderdown. Please stop by learn more about the quirky side of urban farming and a discussion of urban agriculture in Louisville!

Here’s more info on the event from the Urban Design Studio:

TRUCK FARM tells a thoughtful yet comedic story of a new generation of American farmers in this 50 minute film. Using green roof technology and heirloom seeds, filmmaker Ian Cheney plants a vegetable garden on the only land he’s got: his Granddad’s old pickup. Once the mobile garden begins to sprout, viewers are trucked across New York to see the city’s funkiest urban farms, from rooftop gardens to farming on parking lots and other initiatives that are pushing the boundaries of what we have previously thought about the urban agriculture.

Please join Branden Klayko of Broken Sidewalk, Patrick Piuma of the Urban Design Studio, and friends interested in urban agriculture for an informal get together at Eiderdown to view the movie and discuss local food initiatives in Louisville and where we can go from here this Sunday.