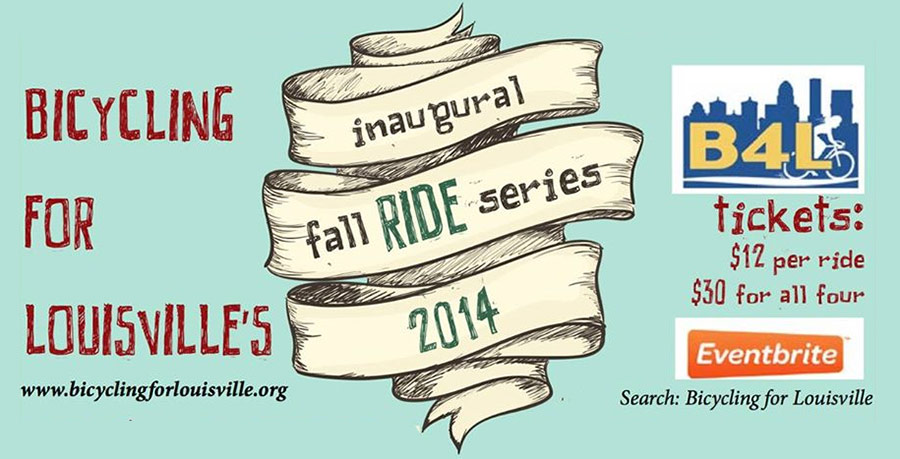 Bicycling for Louisville, the city’s top bike-advocacy and education nonprofit, is hosting its inaugural Fall Ride Series this year, which kicks off this Sunday, September 21 with the People’s Climate March Sustainability Bike Tour. There are four rides in the series, including the Germantown / Schnitzelburg History Tour, the Urban Homesteading Tour, and the Cherokee / Seneca Park History & Ecology Ride.

Here’s some info on Sunday’s ride from Bicycling for Louisville:

On September 21 good people from all over the country will converge on NYC for the People’s Climate March. Kentuckiana will join together in solidarity beginning at noon at Memorial Park. Following this event, the Sustainability Bike Tour will highlight some local initiatives—Lots of Food, St. William Catholic Church, Parkland Community Garden, and B4L’s Falls City Community Bikeworks—that are actively working to combat climate change. We’ll end the tour downtown at ReSurfaced, in support of Love Louisville Trees’ Stouts for Sprouts fundraiser.

The 11-mile ride takes place from 2:30–6:30 p.m. and launches from Memorial Park at Fourth and Kentucky streets. If you’ve been considering getting into biking but haven’t made it onto the streets yet, these group rides are excellent ways to get your bearings and meet others in Louisville’s bicycling community. Tickets are $12 for one ride or $30 for all four and can be purchased here.