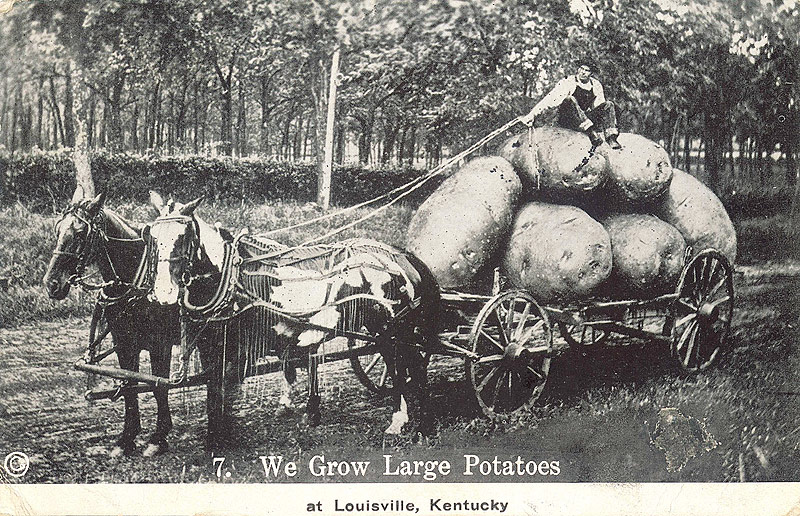 Louisville loves to eat. That’s not just apparent in in the city’s great restaurant scene and above-average waistline size—it’s also part of a growing trend of food entrepreneurship that’s taking shape here. Brian Wallace, founder of the infographic company NowSourcing, thinks Louisville can be a leader at the crossroads of technology and food. This isn’t your typical farm-to-table variety of food startup or a local collab with a celebrity chef—a sector every city in the country covets and competes for ravenously. Wallace is interested in looking at food in a bigger way—think logistics, distribution, and incubators.

This summer, he called together Louisville’s tech startup scene in an event called #ThinkBig to figure out how the city can become a national tech leader, something Forbes magazine sees Louisville as poised to do. After a huge turnout at the inaugural event, Wallace is inviting Louisville back to discuss ways Louisville can tap into our rich local supply of what he calls “food intelligence.” The free event, #ThinkBig Food Edition, takes place on Wednesday, November 19 at 6:00p.m. at his office off Hurstbourne Parkway (RSVP here for your free ticket). The panel discussion includes:

We caught up with Wallace before the event to ask him about food tech and what it means for Louisville.

Broken Sidewalk: You started your #ThinkBig series with the imperative, “Stop thinking small, Louisville.” How do you see Louisville evolving into a bigger-thinking city with a more vibrant start-up and entrepreneurial scene?

Brian Wallace: We have a tendency in Louisville to think small as we’re more geographically isolated from other large cities as compared to the Northeast Corridor and out West. While Louisville makes for a great quality of living with good accessability, safety and its fair share of culture and events, we generally think small. Louisville’s combined metro population is approaching 1.5 million in a country of 317 million people and it often comes across that we lack the self-esteem to think we’re good enough to compete on a national level.

I’m glad to see that I wasn’t the only one feeling frustrated about this—our first event we sold out the 150 ticket cap and had an overwhelmingly positive response, so we’re going to make #ThinkBig a regular thing. It’s the cross-pollination of bringing together people from different aspects—venture capital, entrepreneur, developers, designers, all kinds of roles of focus and business vertical—with people that want things to change for the better that can make this happen. We need to improve our esteem and image locally and get the attention of the outside world.

You moved to Louisville several years ago and started your business here. What attracted you to the city and why do you think Louisville should compete on a larger playing field? What does it take to be a strong start-up city?

It wasn’t the result of any active Louisville recruiting effort—you could say it was more of a fluke—my wife and I had to come for a medical reason two weeks before 9/11 and really loved the place so we took the opportunity to come back once we started NowSourcing. Being a guy from the New York City suburbs and my wife from upstate New York, Louisville appealed to us.

As far as what makes a strong start-up city? I’m not really a city builder but will try to answer that one—let’s make a checklist and check off the ones already accomplished:

The second event in the #ThinkBig series is going to explore the intersection of food and technology. What does that mean and how is Louisville well-positioned to be a leader in that field?

Food is recession proof. You need to eat, so there is always a market. Food/tech is a growing market as people are always hard at work on how to feed an ever-growing world population. Take that to the next level—we are in an unprecedented time where all sorts of industries are coming together now to take care of the whole human: agriculture, seed producers, pharma, biotech, technology—it’s pretty wild.

We’ve been talking with a number of companies across the country to see how it all comes together.
What’s interesting is that many of them are astounded when we show them how much food intelligence we have in Louisville—YUM Brands, Long John Silvers, A&W, Tumbleweed, Texas Roadhouse, Pappa John’s, all the bourbon, the UPS supply chain, food tech companies like DineTime and QSR Automation, produce distribution such as Creation Gardens, all of the award winning local restaurants and bars, celebrity chefs, the Kentucky Life Science Council, etc.

If we can put this all together, we’ve got a winner.

Your idea for food tech isn’t about restaurants or farm-to-table. It’s about how tech interfaces with food. The panel includes experts related to fast food companies and food distribution. Can you explain more about that?

Starting a restuarant probably has the highest failure rate of any industry. And we have tons of them already. It also doesn’t bring all these different types of people together—it’s usually done by successful chefs looking to make their own impact—which is great but probably outside of our reach for the event. What we’re trying for here is to bring together a panel of food subject matter experts so they can relate to the audience problems in the food industry that need solving. Then the crowd can think about what they can create to fix it. Also, this dovetails nicely into Velocity, who is putting together their next cohort of specifically food startups. (We had this idea separately but we’ve been discussing it, it’s a great fit.)

Can Louisville compete against other, larger cities when it comes to tech, even food tech? What are the next steps?

Of course we can! No individual city is singlehandedly winning it. Clearly there are some cities with great food tech such as Chicago (GrubHub), New York (Seamless), and Berlin (FoodPanda). Boston’s doing a lot of interesting things too and even has its own food co-working space/incubator (The Food Loft). There’s so much room to grow.

What’s next for the #ThinkBig series?

As I’ve told many people, the first #ThinkBig was to go wide and see if there was interest—and there was. Next was to go deep, which we are going to do with food. Depending on how this goes, we can either go deeper and more extensive into food or pick some other deep areas of interest. We’ve been toying around with some field trips, too.