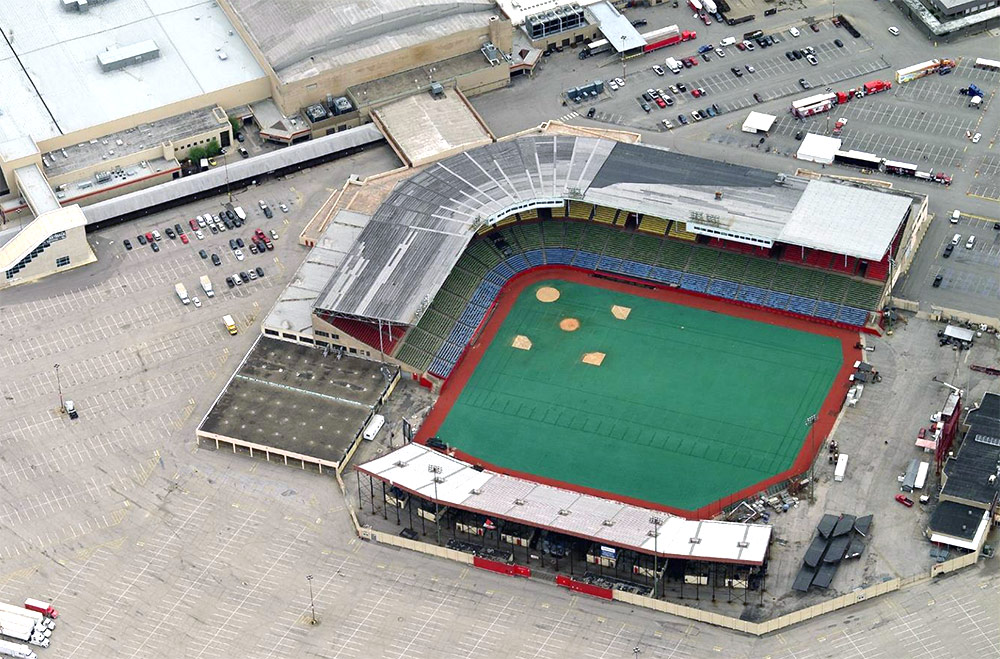 Despite today’s snow, demolition work was scheduled to get underway Monday at the Old Cardinal Stadium at the Kentucky Fair & Exposition Center (KFEC). Louisville-based wreckers, South End Services, have agreed to pay the Kentucky State Fair Board $65,000 for salvage rights to the bleachers portion of the stadium, opposite the main grandstand (at the bottom of the photo above). The fair board has long-planned to remove the stadium, built in 1957, which was largely disused after the Louisville Cardinals and the Louisville Bats both left for their own newer venues. (Interestingly, the stadium also once housed the professional baseball team, the Louisville Colonels, from the 1950s through the 1970s.)

Eventually, the entire stadium will go, but this first phase only covers the mostly-aluminum-and-steel portion of the facility. “At this time, the removal of the metal bleachers is the only scheduled project at Cardinal Stadium,” Clifford “Rip” Rippetoe, president and CEO of the fair board, said in a statement. So that gives us some time to think creatively about the demolition process.

Enter Indianapolis-based non-profit People for Urban Progress (PUP), who saw opportunity in the defunct Bush Stadium, former home to minor league baseball team, the Indianapolis Indians. (That stadium was later repurposed into wildly popular apartments, which I wrote about for The Architect’s Newspaper in 2013.) Bush Stadium was similar in a number of ways to Old Cardinal Stadium, down to its thousands of plastic seats in its grandstand. PUP partnered with the city’s transit agency, IndyGo, in 2011 and salvaged 9,000 of those seats as bus stop benches—called PUPstops—across the city. Here’s how they pulled off that grand slam.

“We’ve almost doubled the number of benches at Indianapolis bus stops using a resource the city already had,” the group said on their website. “To date, 31 stops have been installed, serving roughly 220,000 rides annually. Our goal is 42, and we’re well on our way.”

To get a bus stop bench funded, PUP and IndyGo created a sponsorship program and a sign is installed next to each stop noting those who helped with funding. “The PUPstop program presents community members with the opportunity to support transit in a unique way,” Samantha Cross, vice president of business development for IndyGo told Metro magazine. “Through a donation to IndyGo, program participants will endow their very own PUPstop, made sustainably with a unique local flare.” For $850, you can choose an eligible bus stop in Indianapolis for the PUPstop program, or if you select a stop already tagged for an upgrade, IndyGo will split the cost. The transit agency also covers bench installation.

After salvaging roughly 9,000 Bush Stadium seats in 2012, through a collaboration with Ecolaborative, RecycleForce, and Indianapolis Fabrications, PUP began working with IndyGo to begin installing refurbished seats at bus stops throughout Indianapolis. Before we started, of the nearly 4000 bus stops in Indianapolis, only 42 had a bench.

Remaining seats were sold through the PUP website and some were salvaged to avoid the landfill. Since the Bush seating adaptive reuse project, PUP has gone on to reclaim seats at other stadiums in Indianapolis, selling some of them as furniture and using other building materials to create bus shelters.

Back in Louisville, we’ve got thousands upon thousands of colorful seats that are slated to be trash. Once the bleachers are gone, the fair board will explore funding options to raze the rest of the structure, which is estimated to cost over $3 million for demolition alone. Before we send those chairs to the trash heap, can we learn from Indianapolis and reuse some of them for TARC stops around Louisville?