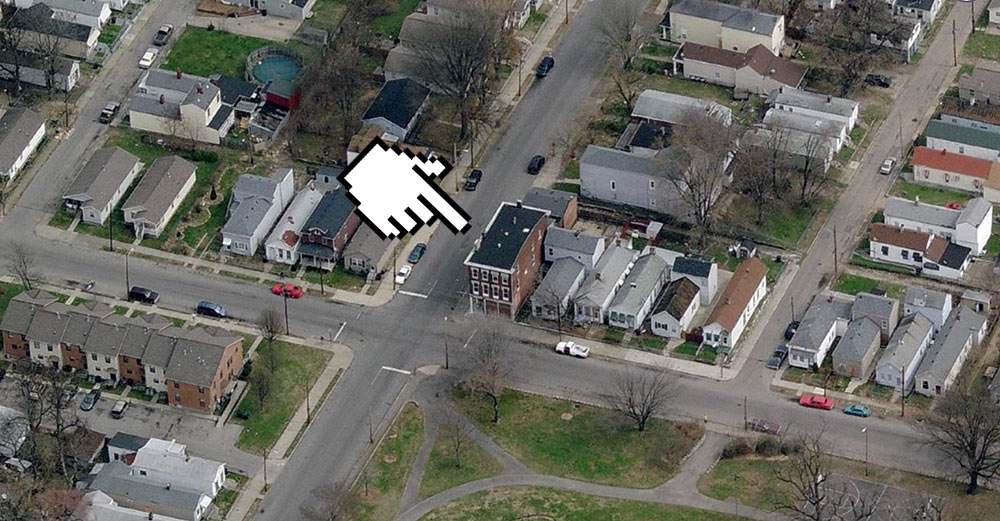 Mitchell Kersting started his architecture practice, WorK Architecture + Design, in 2012 after working in historic preservation in Charleston, South Carolina. Kersting and his business partner and college friend, Tyler Watkins, needed a space to grow the company, and Kersting told Broken Sidewalk that meant looking for opportunity.

Kersting said he chose Portland for the opportunity it represented—and the area’s affordability didn’t hurt either. “You have to come into Portland knowing it’s a work in progress. It’s going to take a while,” he said, noting that the neighborhood faces obstacles that other parts of Louisville don’t have to consider. “I can guarantee you a business in Downtown or along Bardstown Road doesn’t have to weed-eat its sidewalk or the street leading up to it because the city puts a little more money into those areas. Even at Boone Square Park across the street, they don’t cut the grass until it’s about knee height.” Still, Portland’s trajectory only appears to be going up, with a number of new investments taking place all over the neighborhood, from new retail, galleries, and office space to widespread renovation of shotgun houses.

“There’s a building like mine on every block in Portland, just like there was in 1901,” Kersting said. “That’s an entire typology in architecture—the corner grocery store style.” That corner commercial building typology has been under threat across Louisville, with many of the best examples demolished, but Portland originally had so many that examples still abound. “As this neighborhood continues to improve and expand on its original character, I can see this economy happening again where you do have these corner stores, places of activity,” Kersting said. “I can see that happening again.”

After looking at sites around Downtown, the Highlands, and Germantown, Kersting purchased a three-story corner commercial building at 219 North 19th Street and Duncan Street for a mere $33,000. Consider for a moment that the building sits only ten blocks from Downtown and overlooks one of Louisville’s first Olmsted parks, and then look back at the price tag. Portland is clearly full of opportunity.

That doesn’t mean there aren’t challenges. Kersting said that the complicated legal histories of buildings as old as those in Portland can become tangled. “A lot of times you can’t even find out who the owners of the buildings are because they’ve sat vacant for so long or because they’ve been inherited by someone who doesn’t even know they own the building.”

Kersting’s building at 19th and Duncan streets might not have the storied history of the Seelbach Hotel, but it’s story is vital to the Portland community, dating back well over a century. “On the surface, the building looked kind of plain like not a lot had happened there but after digging in to the archives and deeds, we’ve been able to track down the history, which is really exciting,” Kersting said. “The building was originally set up as a feed store. You can imagine the area back then south of Portland still being a lot of farmland. From that point on it was a series of grocery stores, and it had been a pharmaceutical store for a while.”

The building evolved up as Portland grew up around one of Louisville’s most important parks. Boone Square Park was completed in 1892, taking up an entire four-acre block, and is reportedly the site of Louisville’s first organized baseball game. According to the Cultural Landscape Foundation:

The original owners of the property, Mr. and Mrs. William Boone, resided in a Georgian mansion on the site in the 1850s. The mansion deteriorated following the Civil War, and the property was deeded to the city by Eliza Boone in 1891…By the 1930s it was a popular attraction, with a wading pool, volleyball, and organized handicrafts.

“I haven’t seen a park in Louisville used as much as that park,” Kersting said. “It’s incredible, every day at 2:30 or 3:00 that park gets filled with a thousand kids. The city does a Friday movie night once a month.”

Bringing a Building Back to Life

With a long history as a neighborhood-serving business, Kersting said he had to really think about modifying the building. “It was tough for us to decide to take this beautiful brick building and make it something it’s never been before,” he said. “There’s a whole dialogue that could occur over that idea.”

Kersting said the community has been supportive of his plans. “It’s always been a grocery store, but it most recently sold beer and cigarettes and chips,” he said. “I don’t know if that use was actually good for the neighborhood because there were illegal activities going on there. Every person I’ve talked to has been thankful that we got rid of that convenience store. That’s been comforting and reassuring for me.”

WorK A+D will take about 1,000 square feet on the first floor. Upstairs, Kersting added two new 1,000 square foot apartments, which have been leased. Local photographer Tom LeGoff is using the lofted garage space in the back as a studio. The larger renovations to create WorK A+D’s offices are just about to begin, and could cost up to $100,000. Part of that work involves opening up the building’s storefront that had been bricked up for years, and adding a representative historic storefront.

Kersting is also making the building green. “We’re going for LEED Platinum building maintenance and operation,” Kersting said, meaning how the building operates will be highly sustainable. “The way we use the building, the way we clean, the way we get rid of pests, the way we control the HVAC—we’re approaching all of these from a very sustainable level.” He said he should know by next year whether he received the LEED certification. “For us, it makes sense because we’re starting from the ground up, so it’s easy to renovate in a sustainable way,” he said. “And it’s not going green just to go green. It saves money and it makes for less maintenance.”

Additionally, Kersting said the building will get the majority of its power from solar and will divert rainwater from the sewer system. WorK A+D has plans for the roof as well. “You can see the Louisville skyline from our roof, which is really awesome,” Kersting said. “We’re putting a green roof with a rooftop terrace up there.”

And already, Kersting said he’s noticed an impact. “Just since we’ve started cleaning up our building, the couple houses next to ours seem to be a little more proud,” he said. “It gives other people who are less risk takers an example—you’re showing them that it can be done and that it can be done affordably.”