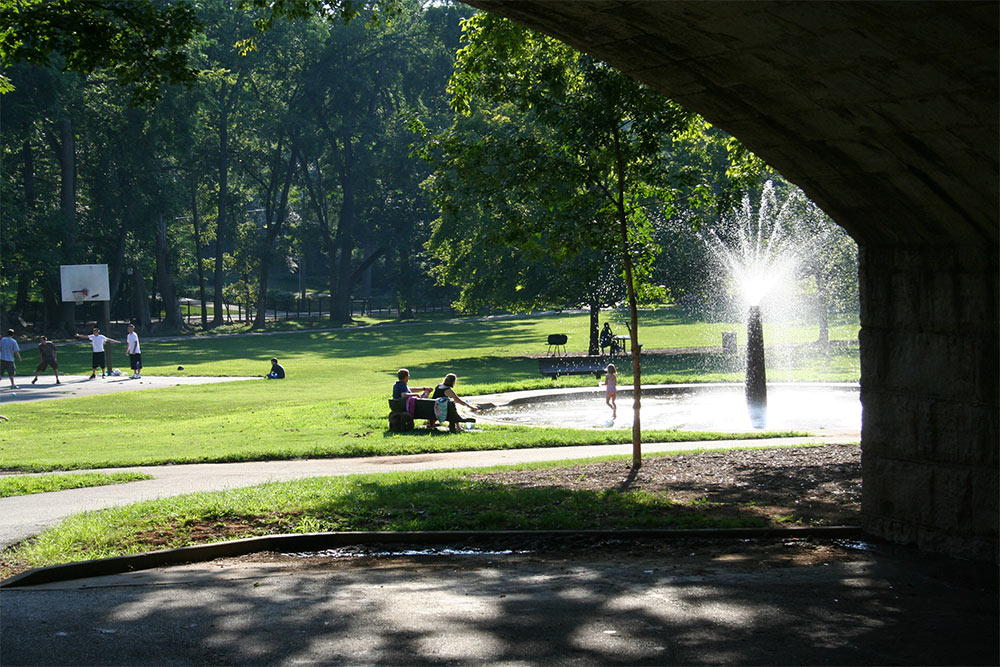 Image: The western half of Tyler park on a summer afternoon. (Amber MacPherson / Flickr)

[Editor’s Note: This post originally appeared on Nick Seivers’ blog, Urban Composition, where he re-imagines various sites around the city. He has been a regular contributor to Broken Sidewalk.]

Several years ago, when I would commute from Downtown to the suburbs in southeastern Jefferson County, I would occasionally try Castlewood Avenue in my effort to avoid congestion. I grew up in the area, so I knew traffic on Castlewood was usually heavy in the afternoons, but that did not stop me from trying this as an option. I appreciate the architectural variety of the surrounding Tyler Park neighborhood over alternative routes. But in the time spent waiting to get through the light at the top of the hill at Baxter Avenue and eventually onto Newburg Road on the other side of Eastern Parkway at 5:00p.m., I started to think about redesigning Tyler Park.

I imagined the bright colors of a festival, a place for open-air performances, benches and tables for old men to play chess, and a skating rink in the winter months. I wrestled with 3D modeling program, SketchUp, to illustrate this vision for a while without any luck—the technology was influencing the design. It wasn’t until I searched for images of Tyler Park that I discovered some online plans for the Olmsted-designed green space that allowed me to get a better feel for the dimensions of the park. My ideas are described below.

Tyler Park rests in a valley between Tyler Park Drive, Edenside Avenue, Castlewood Avenue, and Cross Street. It is divided into two parts by Baxter Avenue, which bridges over the park with strong rock retaining walls. The two sections of the park connect through a massive stone archway under Baxter Avenue, allowing the street to float through the canopy of trees planted in the park below.

The park is removed from the neighborhood through topography and dense vegetation, with defined entrances and stone stairs at key locations. While in the park, these features block out some of the city above, and vise versa, at least in the case of the homeowners lining the park.

The park is divided in other ways, too. There is an east side and a west side that each have their own distinct feel. The east side is the main entrance to the park. As a kid—and still today—I arrive at the park from the east. Parking is more abundant here, and it’s closer to busy Bardstown Road. Even with the six tennis courts, the east side of Tyler Park is the quieter side of the two. The west side has a playground, a splash fountain, a basketball court, a short walking loop, restrooms, and what has been described as a volleyball court. That court is tucked into a corner tens of feet below where Baxter Avenue and Castlewood Avenue intersect. The stone wall of Baxter Avenue, the vegetation, the depth of the space, the shadows create the kind of space you look for if you are trying to hide—not always a feature you look for in a public space.

Activities are physically separated in Tyler Park. The playground, the splash fountain, the basketball court, the volleyball court, and the picnic areas are strung along the walking path on the west half instead of being clumped together. These activities have no relation to the tennis courts on the east side. Not that all activities should be on top of one another, but where there are similarities they should be designed to work together. If nothing else, putting all the play areas within a single line of sight in shouting distance would make it easier for parents watching their children.

Now that I am older, I use the space differently. When thinking about Tyler Park I kept coming back to the idea of a beer garden and a roller skating rink. I am not a big skater but I have been known to have a beer or two. What better atmosphere than under the canopy of, and the lights strung between, the trees. In a park. With a picnic lunch.

In the concept above, the skating rink would be designed for year round use by those on roller blades or roller skates. Through the day and until about 4:00p.m., the rink would be open for pick-up games of roller hockey. Between 4:00p.m. and maybe 10:00p.m., the rink would be open for friends and families to skate in the park, with skate rentals available.  Imagine looking on the couples and families skating from above on Baxter Avenue—Rockefeller Center style—or trying to build up the courage to join in while enjoying the Beer Garden.

The Beer Garden would be open from April to October (Derby to Oktoberfest) between lunch and late evening hours. Families could bring a picnic lunch and sit at one of the long tables in the Beer Garden while the parents enjoy a light or locally crafted beer. The beer selection of this venue is not as important as the warm, replicated atmosphere of the Tyler Park Beer Garden. Bands, theater groups, and movies would play on the stage built into the hill. The stage would be a platform only (no roof for birds to nest and no walls for hiding behind) with towers to either side.  The towers frame the stage, provide space for wires, speakers, and lights as well as create that festival theme I would imagine when stuck in traffic on Castlewood Avenue. A temporary stage could be assembled on the platform when needed. The beer would be served from a building built along the stone wall of Baxter Avenue. Restrooms for general park usage would be just to the west of the Beer Garden enclosing the space. Around the stage and Beer Garden, new art fairs and neighborhood festivals could be arranged.

These activities would be tucked in the bottom of the valley and further enclosed with trees and other vegetation to contain the sights and sounds.  I don’t imagine that the festivities would be programed for much later than – at the latest – midnight on weekends.  This is an opportunity to show off the Tyler Park and Highlands neighborhoods and bring some of the crafts and cultural attractions of Louisville, here, to the casual atmosphere of an outdoor stage.

The new playground would be built between the skating rink and the Beer Garden, around which benches and tables would be arranged. The playground would be close by—but not too close. Kids of all ages can find something to do here, in this re-imagined Tyler Park.

On street parking would be created on the north side of Castlewood Avenue with a slight redesign of the street. A sidewalk along Castlewood from Baxter to Barrett would at last be constructed in this otherwise comfortably walkable neighborhood.  I assume there aren’t any engineering reasons that would prevent a car from parking on the elevated portion of Baxter Avenue, so parking would be striped there also.

As and Olmstead Park, Tyler Park enjoys maintenance and preservation efforts above other parks in the Louisville Metro Parks system.  The Beer Garden and Skating Rink, though not on the original Olmstead Plan, are consistent with activities in Louisville’s Waterfront Park and are found in Olmsted Parks nationally, such as the Boat House/Bar at Central Park in New York City and the new skating rink at Prospect Park in Brooklyn. The skating rink at Prospect Park is a recent adaptation that introduces contemporary activities into legacy park space. Fees to operate the Beer Garden and Skating Rink would support efforts to upkeep Tyler Park and other Olmsted Parks in Louisville.

I believe that this would be a unique and loved use of one of the many parks in this City of Parks.  A great place for Louisville to go in all seasons of the year.