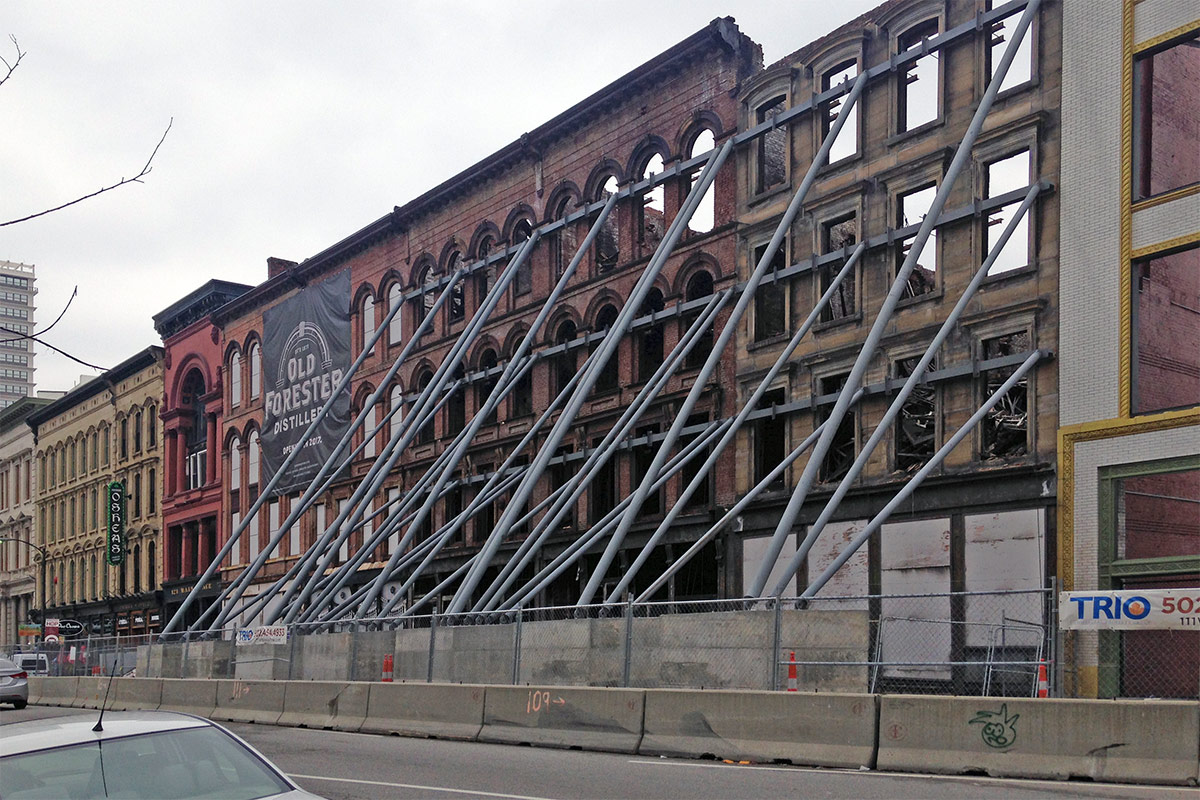 The elaborate web of steel supports propping up the facades of three old whiskey warehouses on West Main Street is a testament to the cultural significance of the so-called Whiskey Row Block.

Over the past decade, the block of boarded up buildings has come back to life with the renovation of several buildings into the Whiskey Row Lofts, Patrick O’Shea’s, and others. That renaissance continues today as two more whiskey warehouses are being converted into the new home for Brown-Forman’s Old Forester Distillery and three more structures are being converted into the mixed-use 111 Whiskey Row.

Those latter plans were delayed this summer following a shocking fire that tore through the buildings, incinerating much of the interior and collapsing portions of the complex’s party walls. The development group, Main Street Revitalization, includes Julie LaValle Jones, Craig Greenberg, and others. They vowed earlier to continue on with the project and engineers were brought in to determine the extent of the damage.

The plan for 111 Whiskey Row remains unchanged, Jones told Broken Sidewalk this month. By mid-2017, the three structures will house a mix of retail, restaurants, offices, and apartments. How the team will achieve that end, however, had to be reevaluated after the fire.

Because the fire collapsed the roof and several floors inside the buildings, a new steel and concrete superstructure will be installed inside 111 Whiskey Row, invisible from the street. “The external face of these buildings will be brick,” Jones said. “They’ll essentially be configured in their original shape.”

Before any of that can happen, however, crews have been on site scrutinizing every detail of the buildings. “We’re analyzing every brick,” Jones said. “They’re looking at whether they can be reused.” That’s part of an ethos that wants to make Whiskey Row a symbol that Louisville values its heritage. “I don’t know if [the state] want us to do that, but we want to salvage the original bricks,” Jones said. “And we are.”

Crews are “going up, over, and down” on tall lifts to study the walls’ bricks and mortar, some of which turned to dust and must be removed. Loose bricks are being stored and other debris is being cleared. It’s an arduous process meant to keep workers safe and the buildings standing.

Jones said the debris removal stage would take a couple more weeks and then a salvage operation can begin. Everything that can be saved on site is being saved, including wood that’s no longer structural but could become furniture for future tenants.

The project is now expected to be complete and occupied by mid-2017. Details on leasing space in the building can be found on the 111 Whiskey Row website.