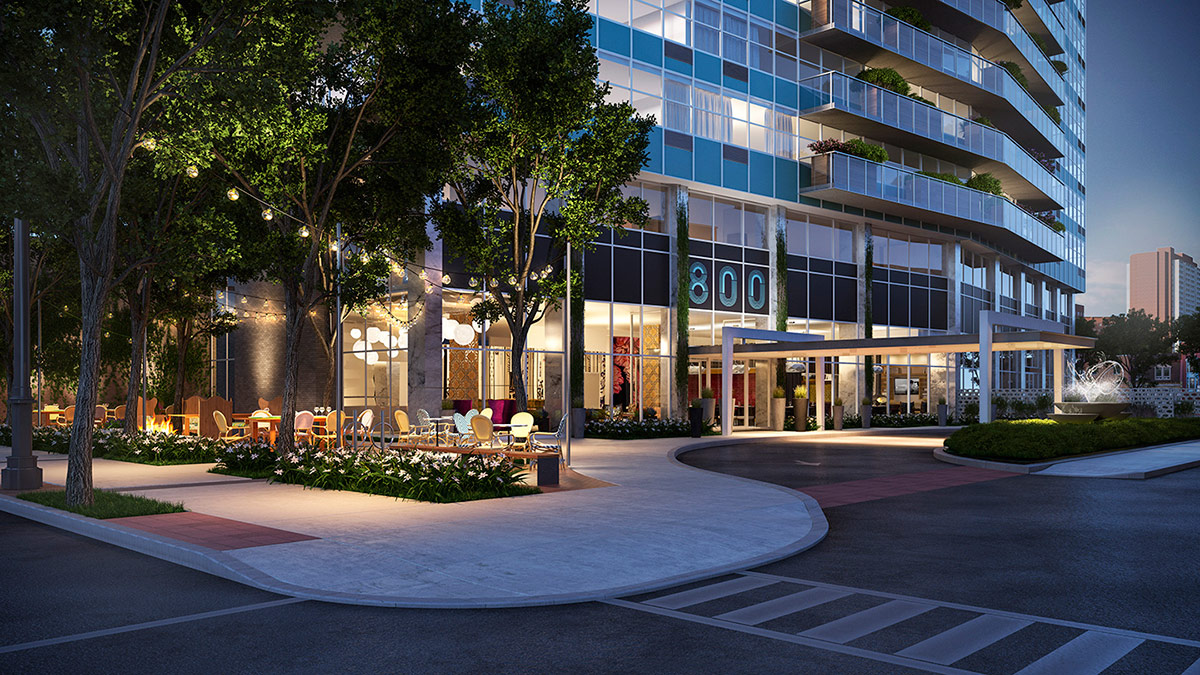 The familiar turquoise skyscraper on the corner of Fourth Street and York Street has an updated name—the 800 Tower City Apartments—and will soon have a dramatically updated appearance, polishing the Mad Men–era details of the 1963 structure and adding a few distinctly 21st century elements.

On August 13, Louisville Metro Council approved forming a tax increment financing (TIF) district for the SoBro project that would funnel up to $2.66 million in new taxes generated from the redevelopment back to the developer. Earlier this year, Village Green paid over $20 million for the building and plans an estimated $10 million in upgrades.

“We’re beginning a process of restoring what’s important and then bringing in current modern,” Holtzman said. “In 1963 this was probably one of the most modern buildings in the country, not just Louisville. We want to take something that was modern and make it modern again. It’s original intent.”

Holtzman said his company is not applying for federal historic tax credits for this project because of the nature of changes they’re planning, such as putting a swimming pool on the roof or updating the lobby. “We couldn’t do that with federal tax credits,” he said. Village Green has used tax credits and strict preservation guidelines in the past, including on a Daniel Burnham–designed building in Chicago.

“Here we tried to balance keeping what’s really important,” he said. “We felt that the canopy entrance was very important, the lobby floors and walls and stainless steel elevators, the original turquoise blue color.”

Those elements will be preserved and restored. “We found somebody who can restore the aluminum to that original color,” he said. “The aluminum was originally very reflective and over time it’s been dulled and pitted by weather. We’re going to bring back those strong elements. And then we’ll start adding the new modern elements.”

Village Green hired Chicago-based Hartshorne Plunkard Architecture (HPA) to design the project. That firm is working on a number of high-profile preservation and new construction projects in Chicago and beyond.

“We’re going to add about 30 brand new apartments,” he said. “Not only are we restoring the existing units, we’re going to be gutting some of the floors and bringing in the most modern amenities and finishes. It’s all about a combination—the best of 1963 and the best of 2015.” That brings the total number of units in the building to 286. Above: Village Green will restore a water feature and canopy at the building’s entrance, add new landscaping, and outdoor seating for a restaurant and bar. (Courtesy Village Green; Google)

The new 800 will feature expanses of glass at the street level and at the rooftop amenity levels. At the entrance, Village Green will add a new restaurant and bar with an outdoor seating area, a pocket park, and restore the original canopy. “At the edge of the canopy there was a water feature in the original design,” Holtzman said. “We’re going to put it back.” He added that the restaurant and bar would be a locally owned concept intended to integrate the 800 into its surrounding neighborhood.

“The building needs to engage with the neighborhood,” Holtzman said, noting that it’s across from the Main Branch Library and Spalding University. “We’ve worked closely with the city to bring in streetscape improvements that end at Broadway and Fourth. Instead of having this Broadway barrier, we want to take those streetscape improvements and keep on going down the street all the way to Spalding University. Let’s give this a greater CBD connection.”

“We want there to be a flow of people walking between Spalding and Downtown,” he said. “We want people coming to the restaurant or the pocket park to sit there. Having people there adds to the vibrancy and makes people feel more comfortable.”

More glass will be added on the 800’s “uniquely large” terraces. “Instead of having that perforated aluminum panel, we’re going to replace it with glass,” Holtzman said. “One of the most dynamic design trends in the world right now is lots of plant material.” He envisions the balconies as tenants’ backyards in the sky, where they could grow vegetable gardens, flowers, or even put Christmas trees. “By making that glass, the sunlight can come in for the greenery, and people from the street can look up and see the beautiful mid-century modern building and it’s green on all of these floors.” He added that when you look up from the street level, that greenery would be continued on the roof with trees.

Along Fourth, Holtzman said plans call for softening the structure’s blank parking garage wall with more greenery. “There’s that big ugly masonry square that’s the parking garage on Fourth Street,” he said. “We’re going to Boston Ivy that thing. We want to turn it into a big green wall.”

On the roof of the 29-story tower, the 800 will boast an ambitious set of amenities. “We’ll be taking about half the top floor and removing all the apartments and replacing it with a dynamic club room—we call it the Sky Club,” Holtzman said. Overlooking Downtown, that clubhouse includes a kitchen, pool table, outdoor grills, and plenty of seating. On the other side looking south is an exercise facility and outdoor yoga area “facing the hills of Kentucky.” Above, a Sky Deck includes the rooftop pool, outdoor fireplaces, and lounge spaces.

The top of the building will be opened up with floor-to-ceiling glass that will glow like a lantern at night. “Cities around the world are lighting up the tops of buildings,” Holtzman said, noting several local examples in Downtown. “We’re going to light up the top and the bottom of the building.”

“The key thing is, some of this great urban housing doesn’t exist in Downtown Louisville,” he said, noting the lack of high-rise apartment living. “When you think about the 800, it’s the high rise in Louisville,” he said. “It will be the best building, which is what it was in the ‘60s and that’s what it should be today.”

Holtzman said Louisville is poised for growth, citing the city’s strong restaurants and businesses, parks, and local culture. “Some of these smaller markets are behind places like Chicago. We really built up our suburbs and things haven’t become urban yet,” he said. “We think Louisville is absolutely primed to follow the trend that companies and businesses and people want to live downtown.”

Work is underway at the building, and Holtzman said some of the amenities such as the swimming pool and clubhouse could be completed as soon as the end of the year. Rents are expected to range from $730 for a studio up to $1,600 for a two-bedroom unit. There’s a model unit already on site. For more information, check out the Village Green website.