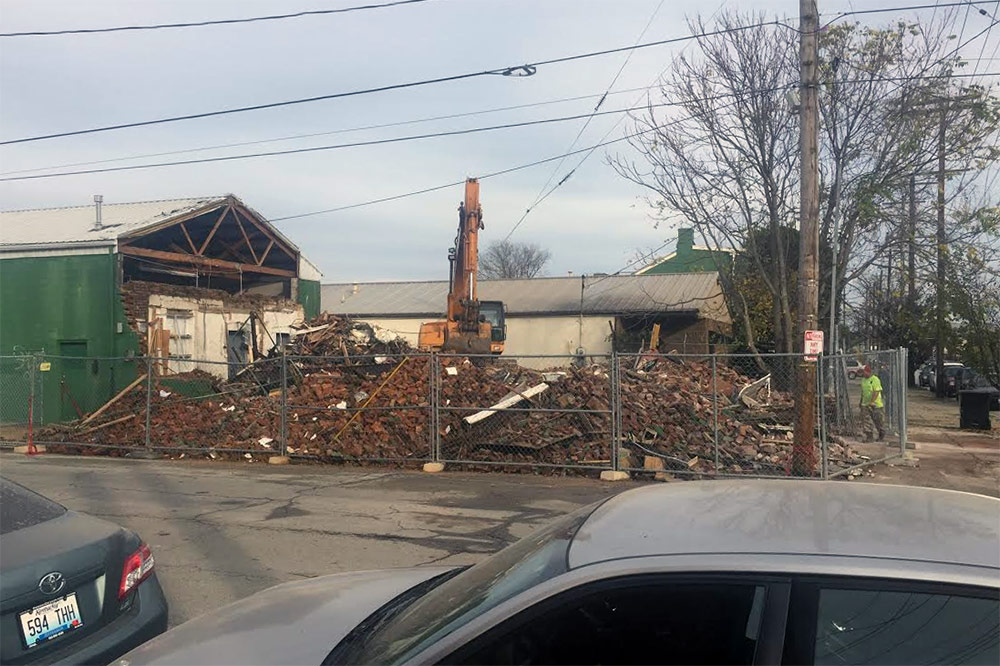 in late October, we told you about a Civil War–era structure that was damaged during a car crash at the corner of Jefferson Street and Campbell Street on the edge of Nulu and Phoenix Hill. The wreck put a hole in the side of the building that sat boarded up for nearly a month before conditions deteriorated and an emergency demolition order was issued for the building.

Today that demolition took place and 231 South Campbell Street/901 East Jefferson Street is gone. A tipster sent in the below photos showing the building this morning and then a few hours later, sent in the above photo showing it reduced to rubble.

“What’s good for 160+ years is gone in a day,” our tipster wrote. “But at least the ugly modern concrete block addition is safe.”

An unnamed group reportedly interested in saving the building was not able to get organized in time before the demolition took place.

We also had several people write in asking why either the building owner’s insurance or that of the motorists involved in the crash didn’t cover repairs early on. The building certainly appeared salvageable. We asked Metro Louisville if insurance funds could have been used in a situation like this, but Develop Louisville spokesperson Will Ford deferred questions to the building owners.

The structure is owned by Premium Horticultural Supply, according to city records, which merged with Ohio-based Waldo & Associates in January. We could not reach the owners by press time. “Building inspectors inspected the damage and found the building to be a safety issue, in imminent threat of failure,” Ford told Broken Sidewalk in an email. “The building owner decided to take down the building and applied for an emergency demo permit that was issued on November 4.”

That differs from what we heard in October when we spoke with Premium Horticultural. Then, we were told the city ordered the company to tear down the building.

The building failed an October 7 inspection, before the additional damage took place, in which the building was referred for demolition by the city and labeled an “Emergency Demolition Candidate.” A request for clarification from Ford was not returned by press time.