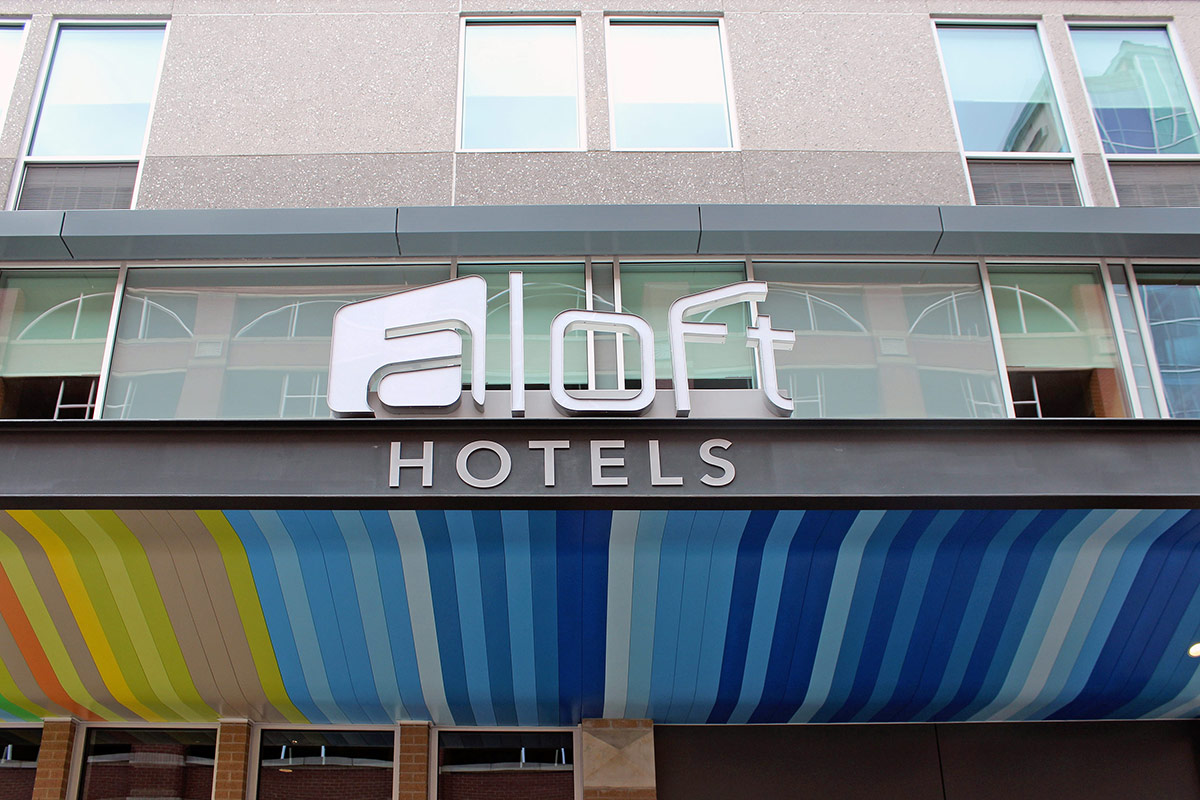 Decades ago, a narrow commercial building was torn down at the corner of West Main Street and First Street in Downtown Louisville. The asphalt lot left in its wake could fit ten vehicles, leaving the entire sidewalk as a curb cut. That missing tooth has been filled in a big way this week with the opening of a $22 million Aloft Hotel on the site.

The hotel held a ceremonial ribbon cutting on Thursday, November 5 in front of its First Street entrance. The Aloft has been open for business since November 3. This intersection has gone nearly a century without a hotel on this intersection since the second Galt House was demolished across the street.

The hotel brand by Starwood Hotels & Resorts Worldwide is targeted toward a younger, design-conscious traveler and is the first of its kind in Kentucky. The project was developed and is owned by Poe Companies, REI Development, and White Lodging. The hotel is managed by managed by White Lodging Services. Atlanta-based PFVS Architects designed the building.

The Aloft Downtown stands eight stories tall with 175 rooms over a ground floor lobby and bar space. Amenities include a gym, meeting space, and a grab-and-go cafe. The exterior includes colorful accents including a panel of glazed green brick. Combined with the clocktower of the parking garage across First Street, the building forms a sort of gateway at the corner. The structure is aiming to achieve LEED certification for sustainable design.

In order to build the structure, developers tore down the historic, two-story Marine Electric Building on First Street, which caused some controversy at the outset of the project. Another two-story building fronting Main Street was also razed but its facade was reused in the project, forming the entrance to the hotel’s restaurant and bar. Other building components were reused throughout the lobby including steel I-beams as footrests at the bar.

The highlight of the project is its retail venue, Corner Restaurant & Bar. The space features modern design with local touches such as chairs made from old bourbon barrel staves. The bar, embracing its location on Whiskey Row, includes over 60 different bourbon choices that can be specially paired with varieties of jerky. Beer, wine, cocktails, and food are also available.

The Corner was designed with large doors that can open up to a sidewalk terrace. A pool table sits along a back wall and a row of books organized by color sit in a niche in a curving wood veneer wall. Our favorite touch is a collection of local manhole replicas hanging on a brick wall.

The new Aloft Hotel joins a number of exciting projects in the works in the eastern side of Downtown including redeveloping three old whiskey warehouses into 111 Whiskey Row and Brown Forman’s Old Forester Distillery across the street, the Ice House Lofts down Main, and a little farther east, the Main & Clay apartments are under construction. Work also just got underway to convert the historic Kurfees Paint Building a block away into mini-storage. Jackie Green is also exploring development options for the southern end of the block.

Aloft Hotels operates 100 facilities across the globe, but is still growing into the Midwest and Southern markets. The brand has locations in Minneapolis, Chicago, Milwaukee, and Nashville, but none in Indianapolis, St. Louis, Cincinnati, or Memphis. Aloft is also opening three other hotels in Kentucky—one in Newport across from Cincinnati, one in Lexington near the University of Kentucky, and another in Louisville’s eastern suburbs.