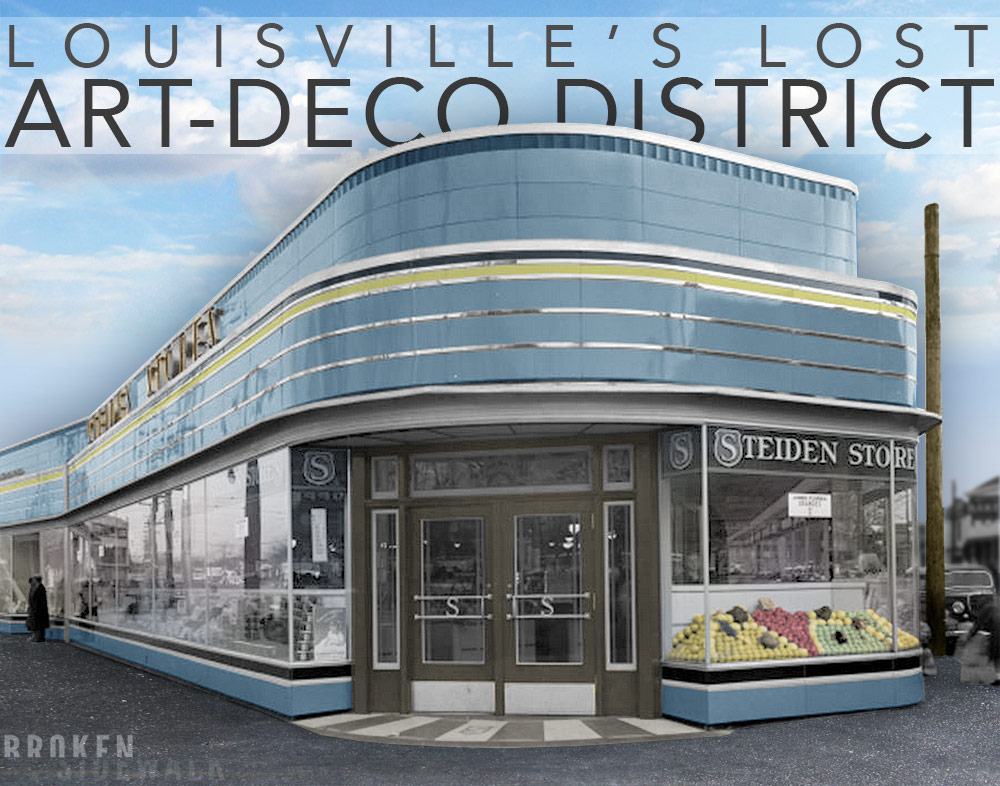 In the 1920s and 30s, the Douglass Loop was the end of the line. The city quickly died off and turned to rolling farmland. The trolley turnaround that gave the neighborhood its distinctive name represented the lush edge of the suburbs in those days—a sort of garden city emerging in contrast to the grit and soot of a coal-powered metropolis just a few miles away.

While the streetcar formed the area’s armature around the Bardstown Road corridor, the latest technology—affordable personal automobiles—were just beginning to revolutionize land use in the American city. Houses were quickly filling the newly planned garden suburbs to the south, fueled on by the spread of the automobile as people were no longer tied to living within a walking distance of their transit stations. The Douglass Loop was at the forefront of this change—and it showed.

As the neighborhood grew and cars continued to become more prevalent, the new-found freedom afforded by the automobile was celebrated in many parts of culture—including architecture. Beginning in the 1920s, the Art Deco movement spread quickly across the country, typified nationally by the crown of New York City’s Chrysler Building. Locally, Louisville once had a sizeable collection of Art Deco buildings, and many of them still exist today. In fact, one Louisville architect—William Arrasmith—was a leader nationally in the style, popularizing a sleek variation known as Streamline Moderne.

William Arrasmith landed a lucrative commission to design Greyhound bus stations from the 1920s to the 1950s. His stations still exist all over the country, one of the best extant examples in Cleveland. Louisville’s own Greyhound station, Arrasmith’s first, was built in 1937 and covered in “Greyhound blue” enamel panels featured a number of significant architectural innovations for its time. It stood at the corner of Broadway and Fifth Street—that site today is a parking lot. (Full disclosure, I once worked as an architectural designer at Arrasmith’s successor firm, Arrasmith, Judd, Rapp, Chovan.) Downtown Louisville has a number of high-profile Art Deco examples, from the Palace Theater to the AT&T building, to more the recent Deco Revival skyscraper, 400 West Market Street.

But out in the quickly developing hinterlands at the Douglass Loop, an Art Deco frenzy was also playing out, with the commercial strip along Bardstown Road housing many examples of Streamline Moderne design that edified an optimism in technology—chief among them cars—prevalent in the American culture of the time. Domestic architecture, always more conservative than commercial or industrial, remained clinging to its Arts & Crafts heritage (with this notable exception), another strong architectural presence in the area, but along Bardstown Road, the energetic architecture must have been a sight to behold. The most prominent Art Deco building in the Loop was located on the corner of Bardstown Road, Dundee Road, and Douglass Boulevard. The Steiden Stores at 2120 Bardstown Road, shown here in the mid 1930s, showcase many elements of Streamlined Art Deco styling, including terra cotta and enamel panels gracefully curving along its facade. This building, then and today, is an anchor to the Douglass Loop and its prominent size and styling welcomed those riding the trolley line to the neighborhood. Take a look at a few other views of the stores below. Today, the structure is still an active part of the Loop, but it lacks its original architectural distinction. It is not difficult to imagine, however, a recladding of the structure that could bring back some of its original grandeur. One of the remaining Art Deco structures sits on the corner of Bardstown Road and Harvard Drive, today housing the Blossom Shop. The modest commercial building includes subtle fluted details on its facade. Take a look at an earlier view of the building below. Sitting just to the south, F. W. Woolworth Company was housed in another sleek building. Clad in glazed terra cotta bricks of contrasting light and dark colors, the building featured three refined setback entrances and large display windows that engage the sidewalk. Today, another drug store, CVS, sits on the site, but the new building eschews the forward-thinking designs of its predecessor, instead settling for the a second-rate copy of the more conservative Arts & Crafts style. And with an inward looking store design, display windows that function more as billboards, and a massive drive through, the new structure doesn’t come close to the urban form of its predecessor. Nearby, today’s Conn’s Auto Service at 2251 Bardstown Road once has a much more distinctive design. Based on the location of the garage bays, entrance, and corner windows, it appears that the structural bones of the building are the same, but in the 1950s when the above photo was taken, the building was clad in what looks like more terra cotta bricks, featuring sleek rounded corners and distinctive lettering announcing “Aetna” over its main entrance. Another gem that’s been clad over with more humble materials sits at 2232 Bardstown Road. The structure here began its life at the Highland Chevrolet Company featuring expansive glass facing the street, pouring natural light into its showroom. Blue tiles were included along the building’s base and lining the doorway. Above, the structure appears to be clad in traditional glazed brick with a horizontal pattern of blue bricks running through it, echoing the older streamlined buildings on the street, terminating at rounded corners. A distinctive neon sign completed the arrangement. This is the building with a ramp that allows parking on its roof, likely used to store the dealership’s inventory of Chevys half a century ago.

Today, the structure houses Drexler Plumbing (with a beautiful neon sign) and Franklins Custom Frames. It’s glass storefront has been replaced with small windows set in wood siding. With Drexler’s move to Buechel last year, the 14,500 square foot building has been listed for lease, and rumors just began swirling that the space could include three retail spots such as restaurants. Perhaps new tenants could being with them a restored facade. Another car dealership in the area was not designed in Art Deco, but did pack a modern punch. Girdler Motors sat at 2410 Bardstown Road in what is today the parking lot for Kroger. The photo above shows the building as a new “permastone” facade was being installed on its brick facade in the late 1950s or early 1960s. The structure featured large expanses of glass and a prominent neon sign. Back where we started at Bardstown Road and Douglass Boulevard, what’s now a for-sale former PNC Bank branch once housed a small Shell service station with a few distinctive details. It’s a little hard to see in the photo above, but the structure, shown in 1951, features simple lines and plentiful glass.