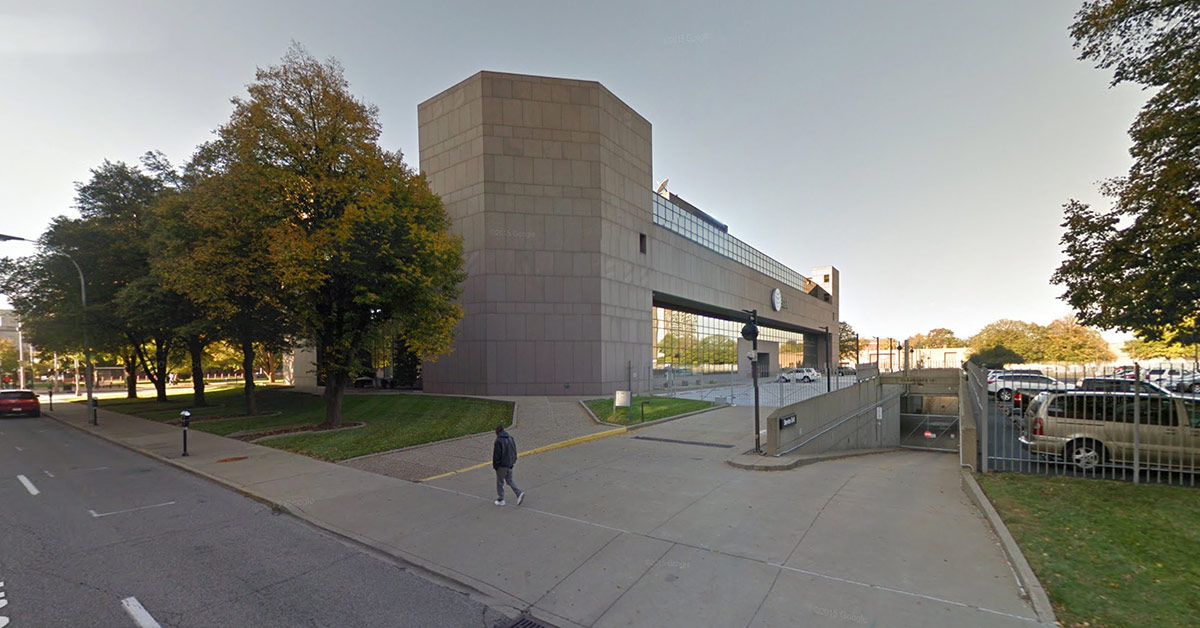 The property sprawls over 4.7 acres—larger than a typical city block—and includes not just the mammoth office building, but also a large surface-level parking lot and a grassy area with a running track.

The office building was built in 1978, a time when urbanistic ambitions were not what they are today. It is set back from the street behind sizeable grassy strips and its neo-Brutalist style asserts itself with heavy corners clad in granite veneer. The building’s mass disguises its five floors, making the structure appear visually as three. Spanning the entire block, the structure contains large floor plates that are valued by many office users.

The building site sits across Chestnut Street from the Mazzoli Federal Building and next door to an outpost of the Jefferson Community & Technical College. This area is where the Central Business District begins to fray and lose all identity among building fragments and parking lots—this despite several monumental buildings and institutions in nearby blocks.

Even though the area feels isolated and quiet, it sits only a few blocks from the full activity of Downtown and a careful repurposing of the AT&T property could help to knit together what’s left. While the building sits on the market, let’s ponder how the site could change with a new owner and a new use.

First of all, the property sits in an ideal location to spur activity in an area devoid of street life. Directly south of the building, across Chestnut Street, the Mazzoli Federal Building sits behind the beautiful but under-maintained Martin Luther King Jr. Park (originally Federal Square Plaza). The defining element of the park is the River Horse fountain, which is often dysfunctional. Designed by famed Louisville sculptors Barney Bright and his assistant Ed Hamilton in 1973, the bronze art display features a winged pegasus with a fishtail springing from a ledge and spitting water from its mouth. A series of pools once featured waterfalls but mostly remains dry. Rehabilitating the AT&T property would be greatly benefited by a much-needed update to this park.

The AT&T structure itself, despite being designed as if it’s in a suburban office park, is sturdy, well-maintained, and likely isn’t going anywhere, so figuring out how to adapt the building’s reclusive form to something more city friendly will be key. This challenge is doubly difficult as the property is ringed along its sidewalk by large trees. Because of the park across the street and the overabundance of setbacks and parking lots in the area, there’s no need to keep this building’s grassy setbacks. It only erodes the monumentality of nearby public buildings.

Bumping a one- or two-story addition out to the sidewalk level filled with active uses fronting the park would help make the area more urban and alive. Adding a green roof will give the health of the area a boost and help to alleviate stormwater runoff problems that lead to Combined Sewer Overflows. Additional green infrastructure along the sides of the building would do the same.

Behind the building, however, is where the real potential for change begins. With a park across the street, there’s absolutely no need for a private, gated walking track and picnic area. The small amount of parking on the site could also easily be absorbed by surrounding street parking and parking garages or replaces in a new development scheme.

The block containing the property is an oversized one, limiting the walkability of the area. Inserting a new street between Sixth and Seventh streets through its center dividing it in two would help increase redevelopment space. Call it an extension of Guthrie Street. The new street could eventually extend east or west to create a more refined street grid in the area.

Besides increasing walkability, the new street increases the land’s value as it creates more frontage on which to develop the underutilized land. Mixed-use buildings with apartments, rowhouses, offices, and retail could form a U-shape extending north from the existing structure with either parking or a courtyard in the center of the square doughnut. Depending on the placement of the new street, the property could develop one or both sides of it, increasing further the development potential.

In the end, this property is an expensive purchase at over $11 million, and a phased approach of using the existing building and phasing in new construction would likely be required. We hope potential investors in the property see it as more than an existing office use with a parking lot attached and see how much more could be made of the entire parcel by building back the city.

What would you like to see take shape at the property?