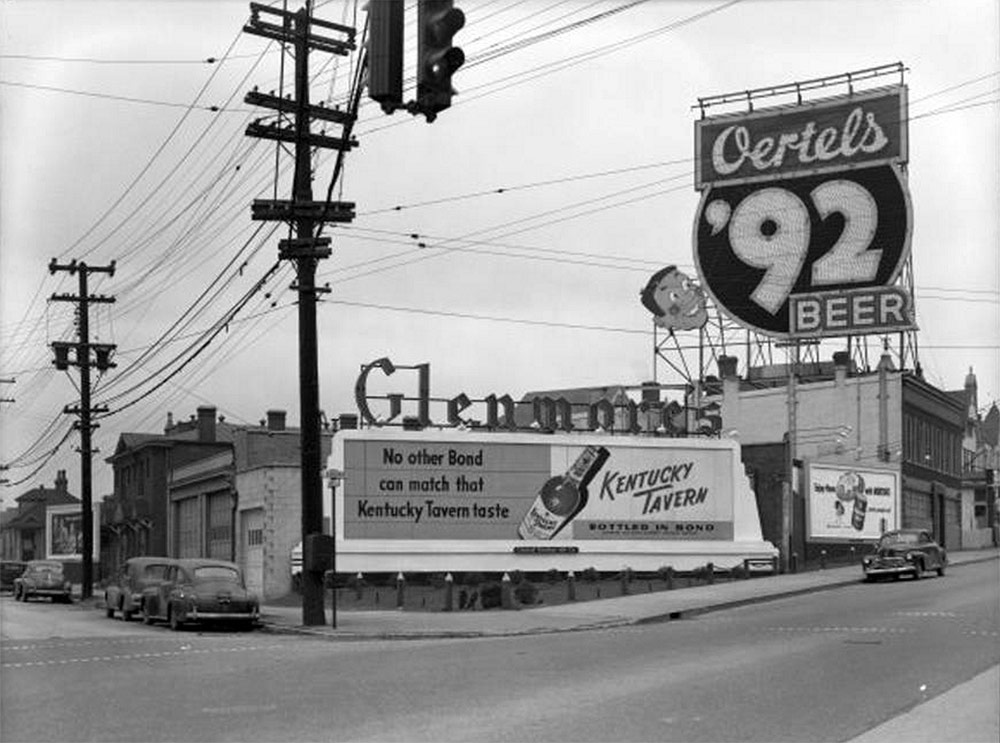 Go stand on the corner of East Broadway and Barret Avenue and you’ll find yourself nowhere in particular. The two north corners are surface-level parking lots, the southeast corner is a spectacular, albeit windowless, brick storage warehouse, and the southwest corner is occupied by a mutilated two-story mixed-use building. Looking in the distance is a colossal concrete silo along Beargrass Creek.

The streets here are undefined, the pedestrian experience is windswept and overbearing with wide streets, and there’s not much to see or do, or anywhere close by to walk to. Not a lot of city life to speak of. A century ago, the situation on the corner was slightly better. The acute-angle corner was filled with a wedge-shaped, two-story drug store and saloon. Houses and a two-story brick commercial building filled up the rest of what today is a parking lot.

By the 1950s when these old photos were taken, billboards dominated the corner. The drug store and its building were long gone. Glenmore Distillery’s Kentucky Tavern bourbon prominently faces the corner in an empty lot while a massive Oertels ’92 Beer sign towers overhead. Today, the site is a parking lot with some 60 spaces and a large retention basin to hold stormwater running off from the sheet of asphalt. The property belongs to Concordia Lutheran Church, which has called the block home for over a century.

The church began life as the First German Lutheran Church. According to the church’s website, the first service was held nearby at Clay Street and Broadway on February 3, 1878 with 30 people in attendance. The church moved in 1880 to Clay and Market streets before settling at their East Broadway location in 1892.

As you can see in the 1905 map above, the church first built a structure in the back of their property well off the street. They planned to build a more grand structure in front when funds became available.

In 1930, that new building was complete and the church changed its name to the present day Concordia Lutheran, Latin for peace. The structure was designed by New York City architect Ralph Adams Cram with stained glass windows by Connick & Sons of Boston.

The area all around the corner, however, is in transition. Just up the hill on East Broadway, the former Mercy Academy property is being converted into 200 apartments, and a block beyond that up to 300 more are planned at the Phoenix Hill Tavern site. To the west, Paristown Pointe is about to get a complete overhaul into a cultural and arts center.

There’s plenty of activity all around, but what will come of this intersection?

While this corner in particular might not see redevelopment in the near future, the rest of the intersection is ready to go. We’d be thrilled to see the OK storage warehouse get the mixed-use treatment. Imagine the views from the top floors! That little two-story building on the southwest corner did just get a tune-up, albeit a very poor one, and the northwest corner is occupied by a non-descript modern building that could easily make way for something more substantial.

Share your ideas for this pivotal intersection between the Highlands, Phoenix Hill, and Paristown Pointe in the comments below.