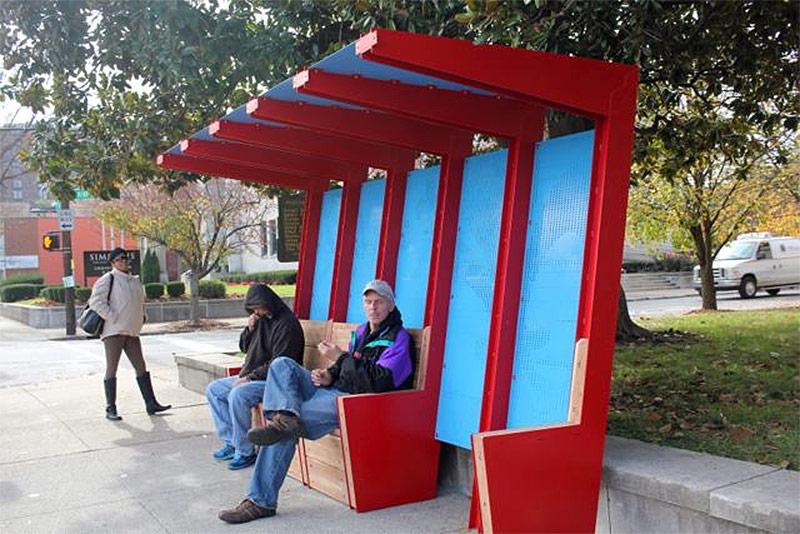 Bus stops in Louisville are usually nothing to brag about. Most often marked by little more than a pole in the ground, the city’s transit riders put up with a lot just to get around without a car. But the so-called Beta Bus Stop Project by a collection of local organizations and leaders is helping to make taking the bus a little more comfortable in a big, design-minded way.

The first of two Beta Bus Stops is now complete and installed in SoBro at the corner of Kentucky Street and Fourth Street. (The other bus stop will eventually land in Shelby Park.) And on Saturday, a dedication ceremony will welcome it into the city’s transit system.

That particular bus stop has been a lucky one over the years. Situated on the edge of Memorial Park, the stop previously included a standard catalogue-bought shelter and a fantastic concrete bench in the shape of a fallen column. (Not to mention that you get to look at the beautiful Memorial Auditorium while waiting for the bus.) Today, the design was ratcheted up another notch.

“We believe small enhancements to our public spaces encourage streetlife, generate vitality in our urban neighborhoods, and promote walking, biking, and transit use,” a team of designers, planners, and neighborhood activists said on their crowdfunding Ioby page. “In addition, we want this project to set the stage for future bus stop improvements across the city.”

“Our goals are to enhance the bus riding experience, improve neighborhood connectivity, and generate new activity centers that draw positive attention to these up-and-coming neighborhoods,” the Ioby page reads.

The bus stop contains benches, transit and bicycle maps, and a large dose of design using many local and salvaged materials. The design uses simple components designed for their replicability, so if these bus stops are a hit, they could pop up elsewhere around town.

The ribbon-cutting ceremony takes place at 10:00a.m. at Fourth and Kentucky and will be overseen by Mayor Greg Fischer. An hour earlier at 9:00a.m., a neighborhood tree planting of 22 trees kicks off at Second and Kentucky. The event takes place Saturday, November 14 at 9:00a.m. on the . (A mural painting event has been postponed until next Spring.)

The project was part of Ioby’s Trick Out My Trip campaign last year, in which crowdfunded dollars were matched for ten projects around the country. Take a look at the other projects here. Ioby is a Brooklyn-based crowdfunding platform that stands for In Our Back Yard. It helps bring resources to people doing good in neighborhoods.

The Beta Bus Stop was made possible by a partnership including the Shelby Park Neighborhood Association, SoBro Louisville Neighborhood Group, Bicycling for Louisville, Metro Louisville’s Office of Sustainability, and Luckett & Farley Architects

A second Beta Bus Stop will be installed in Shelby Park at the corner of Logan Street and Oak Street. That stop will service TARC’s route 43 and route 25.